By the time K Campbell enrolled in Recording Connection for Audio Engineering & Music Production, he’d embarked on a couple of different career paths and found that they just didn’t fit nor inspire him. We connected with K to talk about getting on-path, quickly elevating his skills, and working his way into a paid position at the studio where he externed. We also got K’s advice on how others can make the most of their time in Recording Connection, and more!

Even though you’d always loved music, you were on a couple of different career paths prior to finding Recording Connection.

“I was going to school for nursing at first. And I did that in high school, and I did that first year of college. And then I quit doing that… and went on to Owens Community College, and I took classes there under a fellowship… becoming a [mechanical] engineer in that fashion… but… the factory atmosphere wasn’t fitting with my inner feelings. Then my last-ditch attempt [to make music] was actually something somebody special to me told me, and she was just like, ‘You could do it if you really wanted to.’”

That someone special inspired you to start making your own music. What then prompted you to sign up with us?

“I was just in a spot where I felt like I was trying so, so hard to grow my skills and become better. And I was just falling short, and I didn’t understand why. I didn’t understand what was missing. So, I was hoping that through Recording Connection, I would find that. It seemed, like being able to work in an establishment with people who are making money doing this, and this is their life, that I would get the best shot at that, and I did.” Watch our Straight Talk video with K below for more about his journey.

What, exactly, were you creating on your own?

“At that time, I was making a lot of beats and trying to mix and engineering my own music that I was making. And between the beat making and the mixing, I just felt like I was improving, but not the way I wanted…. I felt like I was so lost as far as where to start on things.”

Learning on one’s own is a great thing to do but without a solid foundation, it can be a case of you don’t know what you don’t know.

“That’s exactly where I was. [I] was in a spot of not knowing, like I can look up a thousand tricks to do one thing…. Where I was getting at was, like, ‘Okay, I learned how to do this one thing for this specific time and for the specific manner, but, like, how do I actually use a compressor all the time?’ Not just, ‘How do I use it one spot,’ and that’s what I was falling into.”

You made it a point to show your drive and commitment during your externship at Clear Track Studios and worked your way into a paid position. How did you do it?

“Initially, I saw that there were people helping out around the studio…. They would come in on different days as I was coming in to sit in on a session or help somebody out with a drum set up or whatever. And then I had noticed that there was nobody all of a sudden…. then I asked around, you know, the studio thinking that that was going to get me, you know, super close to getting the job that I wanted…. They asked me how many days I wanted. I asked for all of them… And she was, like, ‘Well, we have three available, but we don’t start anybody off, like with more than a day.’ And I was, like, ‘Okay.’”

How did that voluntary position turn into a paid job?

“They had one job that… they just needed somebody who knew how to work the board and knew how to set them up and patch them in. So, they hired me on for that…. From there, just being around enough sessions and helping out, they were, like, ‘Basically, you already do the job.’” Note: K has since left Clear Track and taken a post at YSE Loft Studio, a new studio where he says he can be “a part of it… from the ground up.”

“I love music…. At first, I thought I was just going to make my own music and be happy with that. And then it was, like, ‘Actually, I could really fall in love with engineering even for other people.’ And then it was, like, ‘I could really love producing for everybody.’ So now, it’s just so much further than what I could have ever imagined, the more and more I learn….

I’m learning how to play the piano right now. I just picked up drums. My goal is to be able to produce with actual instruments by the end of the year, not just using MIDI and plugging in stuff…. I just started a producer group, Antidote. And right now, we’re trying to build up packs and figure out the right communities to be involved in.

What’s your advice to current and upcoming Recording Connection students? How can they make the most of their time in the program?

“Relax. Just breathe. And if you’re wanting it bad enough, you’ll know when to look up. You’ll know when it’s like, ‘Yo, I need a break,’ and give yourself that break. Give yourself that ease. If it feels too easy, then you’ll know… that’s when you got to turn it up, but just trust that inner voice. But there’s nothing anybody on the outside should be able to say that boosts your confidence or deters you unless you let them. So just be very controlling of the energy you allow around you…. And remember that it gets better. You can only get better, as long as you keep trying, you’ll only get better.”

“Thank you. I feel like I want to be humble about that so much, but then again, I also… really want to let people know that any of this is possible. I didn’t do anything crazy… I look around me, and I’m like, ‘I’m not going to be outworked.’ And it doesn’t come down to anything more than just being consistent, keep doing it every day… and just keep on just trying to get better…. You can do whatever you want. And if this is what you want, you just got to figure out how to make it happen. Everybody’s story is different, but you can figure it out.”


K shares his journey going from not knowing what he was missing to getting going and expanding his musical goals and vision with Recording Connection. 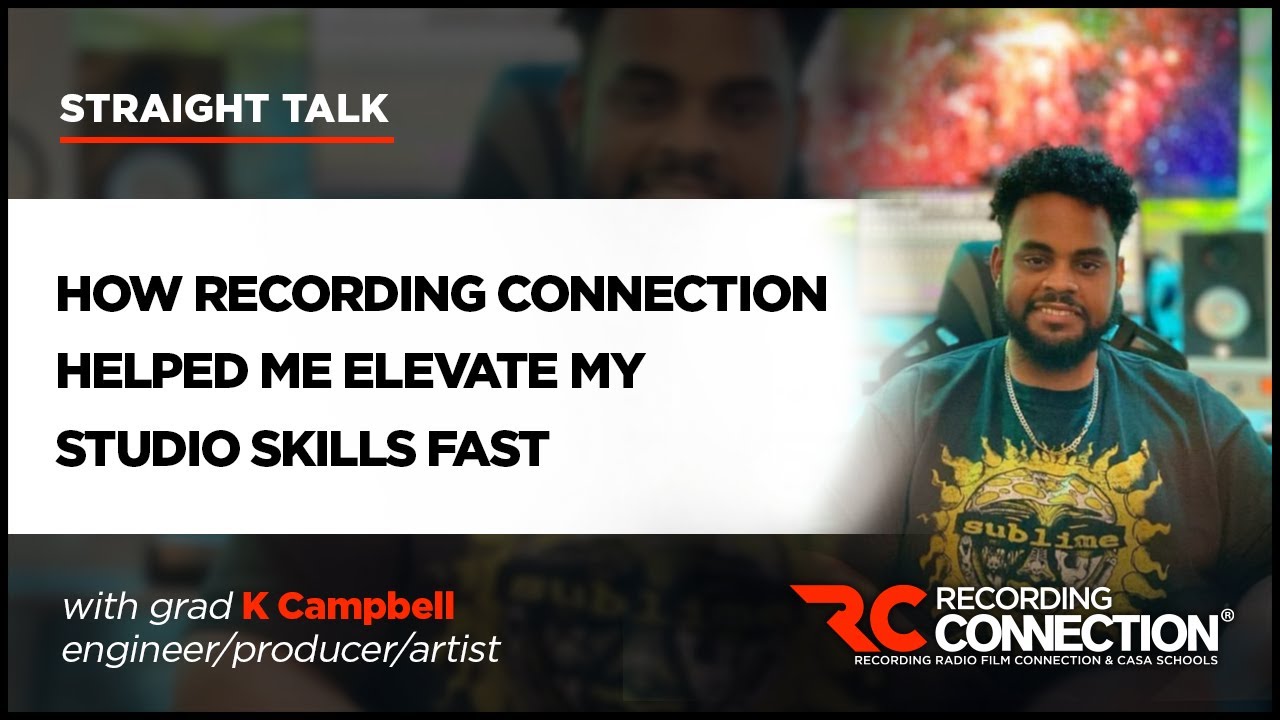