Recording Connection mentor Ryan Conway on Who He Hires, Having Effective Songwriting & Pre-Production Sessions, and More!

Recording Connection mentor Ryan Conway (Jadakiss, Ghostface Killah, Bubba Sparxxx) of ConwaySound Production-Recording has been a mentor for more than ten years. We connected with Ryan to get his input on fostering fruitful songwriting and preproduction sessions, discuss who he hires, and get his take on how students can maximize building highly relevant, useful skills during Recording Connection.

What’s the objective of a songwriting session? How do you keep the creativity flowing and everyone on point?

“When you look at most of the stuff that’s on the radio today, you tend to see a lot of writers on it. So, there’s, generally a lot of people in the room…. The main objective is to write songs… and ultimately have the best songs that we can have. [So, I] get as many different inputs from different people so that we can balance those things out as fast as possible and everybody can grow, both individually, as well as [as] a group. …

And I think keeping it on track isn’t usually too difficult. I mean, I think in general, you want to just get a good start with communicating the goals with everybody and make sure that everyone’s engaged and feels comfortable that they can bring their ideas to the table without being kind of shut down before they get a chance to put them out there a little bit. And usually, once you set up that expectation with everybody, it goes pretty smoothly.”

Having bands into the studio for a pre-production session is something you often recommend. How do you approach those sessions and what’s the benefit of having them?

“I think that having a pre-production session is a great idea. One of the cool things we can do in this studio is we have a computer workstation in the big room here. So that enables us to do a rehearsal, setup simple mic’ing…. That way, everybody can go home with an idea of what these things are going to sound like. I think that a lot of times, people think that things are going to work, and then they get into the studio and find out that they don’t. And sometimes that can be a difficult emotional process to let go of like, ‘But I really wanted this samba breakdown bridge on this rock song,’ and everybody hears it and is like, ‘Yeah, it just isn’t fitting.’ …

There’s a Jerry Garcia quote that ‘Playing live is like sailing a ship on the ocean and recording in the studio is like building a ship in a bottle.’ I think that there’s truth to that. [Recording in studio] can be difficult. You have to be prepared for it…. If people do the pre-production sessions, they can hear it back without having to get so deep into the project. And that can make changes a lot less painful and open up people’s mindset to be willing to make changes and not get too caught up in those things from the beginning.”

You hired Josh Denhardt, a former Recording Connection student who has been at ConwaySound for approximately 5 years. What did Josh do right? “He was the guy that just he slept on the floor in the studio for a while and he moved up from the Springs [Colorado Springs] and would roll up a little mat every day and just do pretty much everything that he could do to get things going and just didn’t give up…. He’s been a real asset because of that kind of mindset…. I guess it’s almost like a cliché sleeping on the floor in the studio. But, you know, sometimes that’s literally what happens.” Get more on what Ryan considers a winning mindset in our Straight Talk video below!

Two recent graduates have also impressed you with their proactive attitudes. Tell us about them.

“Gavin Hislop and John Hann… both of those guys have really impressed me, especially during COVID. I mean, it’s really hard to get out and find new artists and get the ball rolling on things. And both of them have been online a lot, really pushing to get new clients and figure out ways to keep the ball going. And I think that’s been a little tough…. Hopefully, [as] things settle down they can actually go out again. …

They’re both really working on their speed. I think that oftentimes, one of the things that separates a professional engineer from a really good amateur engineer is just being fast. [If] somebody’s hiring you, they don’t want to sit there and watch you fumble through Pro Tools or whatever. Like, you got to have your key commands and… if you only use thirty plugins but you can use them well, that’s going to matter a lot more than dinking around a lot. Both of them have been in [at ConwaySound] a lot and really worked a lot on learning more of the plugins that we have, and learning more of the hardware that we have, and, you know, being fast. And so, those kinds of things, I think, are all really good signs that they’re going to be able to continue to grow.”

How can students make the most of their time in the program?

“It really doesn’t matter what you’re working on, or whether it’s good or not. If you don’t have somebody to play guitar but you can fumble around a little bit and record yourself, then edit it, you know—do that! Because if you can edit a poor recording into a decent one, that’s the skills you want to learn. And I think, oftentimes, that’s what makes people the most employable. So, if you have anything or even a friend who is a poor guitar player and a bad singer, bring them over [LOL!]. You don’t have to try to get your Grammy while you’re in school, just keep working. …

Nowadays with the internet, you can download so many sessions. Like the Telefunken website, for instance, it’s like a demo for their mics, but they have hundreds of different sessions multitracks that you can download and mix and work on. So, we’re always trying to encourage them [Recording Connection students] to do a lot of that stuff because there’s a million little unique problems that you encounter in recording and mixing, and working on records.”

Ryan shoots straight from the hip with advice Recording Connection students can take to heart. 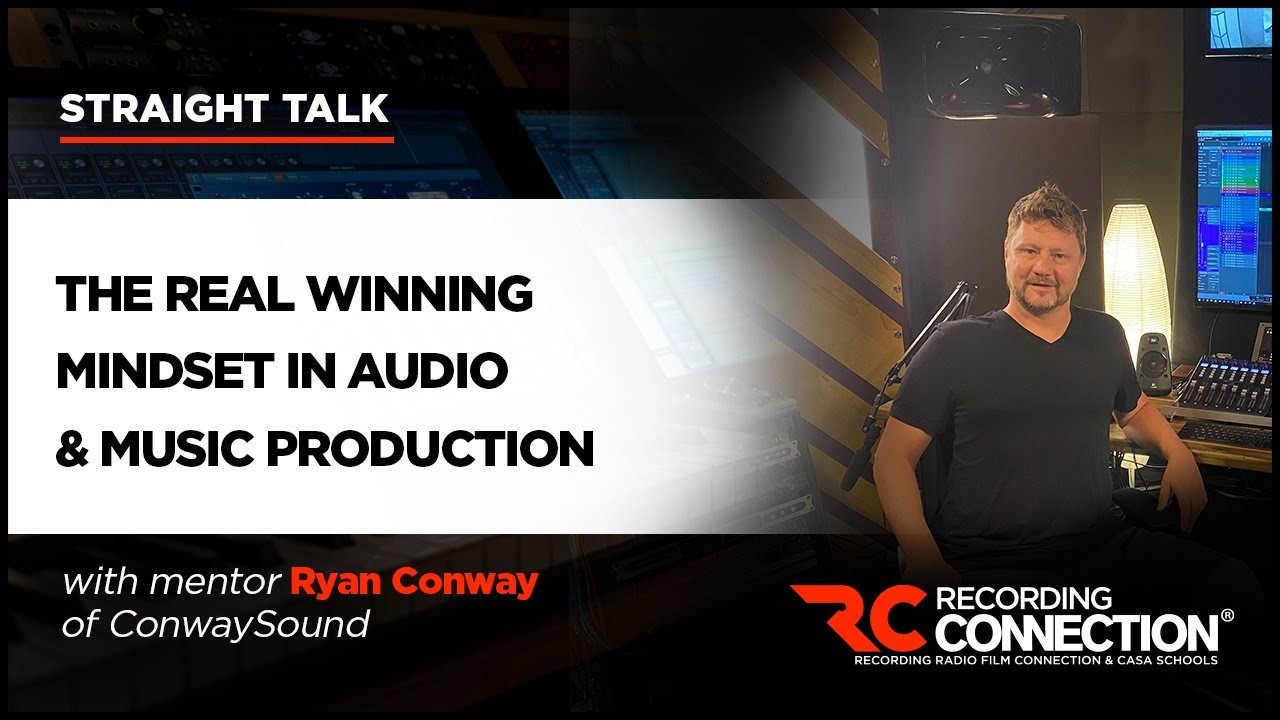