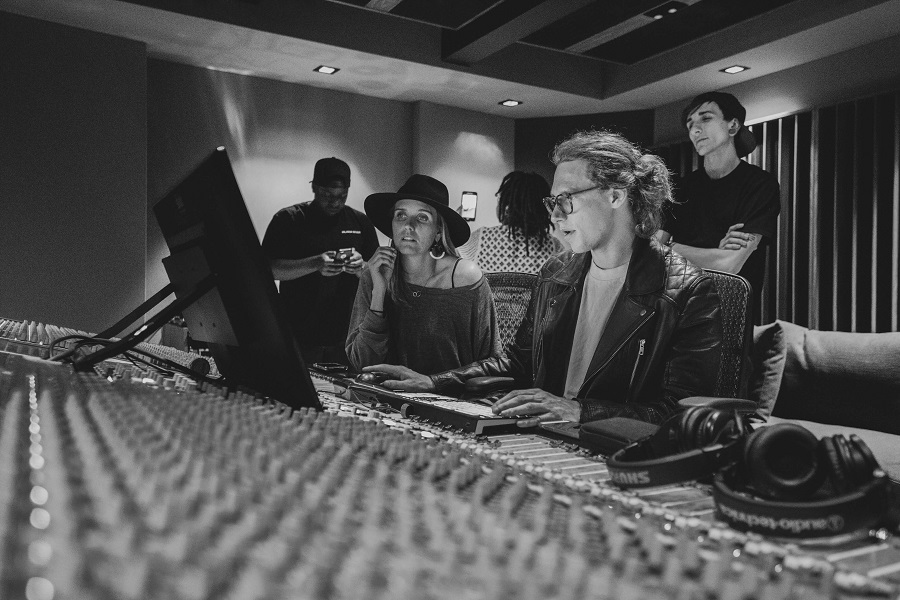 We recently caught up with the powerhouse graduate to talk about his recent work with DJ Paul (mixing Power, Pleasure & Painful Things), and to discuss making a living in music, setting future goals, and crafting a passion-fueled career.

So how did the DJ Paul mixing gig come to be?

“This last year…I was able to start a relationship with TDE. So I was fortunate enough to do some mixing for them back then. Then heading into March of 2019, my first big thing was I met DJ Paul of Three 6 Mafia, and we hit it off on the first session….I was leaving my house and got a call, ‘Paul’s engineer isn’t picking up his phone.’ And this is at Donny’s, by the way, at ES Audio [Tyler’s former Recording Connection mentor], so Donny called me like… ‘Can you do this session?’ Because I had let Donny know if Paul ever needs an engineer, let me know…

I pulled up…I thought we were just cutting vocals and stuff like that. And turns out it was a mixing session. He’s like, ‘Can you mix?’….Usually that’s the next level. You have to gain the person’s trust and make those rough tracking mixes really great before they’re like, ‘Hey, you want to do the mix?’ But no, it was just straight up, ‘Hey, I’m mixing my EP. Can you mix? Okay, let me hear what you’ve mixed.’ So I played him something I actually hadn’t even tested in the studio yet. I’d just finished it, I think, the night before. I’d been working on this artist, Reddish Blu. So I played it….He liked it. So for the next few months, we mixed his EP. Now, he’s a close friend….It was a lot of fun.”

You’ve definitely worked very hard to get to the level you’re at right now in your career. What can you tell us about the realities of making a living in today’s gig economy?

“It’s all relationships. Knowing Pro Tools is like 50% to 40% of the game, and then just being a good person, and aware, and a friend in the studio and helping all the madness make sense and make it look like it’s not madness to an artist is the most beneficial thing.

If you can get somebody to trust you with their baby, which is their music, then you’re going to have a job. There’s so much work out here in L.A. We’re in the mecca of creativity. Here [Los Angeles], New York, Nashville, Florida. Shoot, from what I’ve heard Florida still doesn’t even have big studios. So to me, that’s an open market for anybody to go down there…

For younger engineers, don’t look at it like a money game right off the bat, because there’s a lot that goes into it. For one, we’re working…You have to be okay, like an actor, to be on set for 15 hours. You have to be okay to sit in that chair for 15 hours straight, like I did for the last two days…

A lot of people don’t see their shine until 10 years down the road. That’s a long time for a career, for my father to be in construction. None of my parents or relatives, except for my cousin, are creative. They were like, ‘You’ve been at this for five years and what’s your rate?’ But now my rate’s like double of what they were making when they were my age. So [now] they’re understanding [that] one year can really change the whole thing. But yeah, you have to love it.”

Let’s talk about future goals. What are you focusing on in 2020?

“Time to really develop artists…I feel like it’s time to maybe help somebody get to the next level of their career. I want to see if I can do that, because I know I’m a decent engineer and I can make stuff sound really good really quickly. I can make music, too….I really want to see if I can get an artist in a position that just changes their life.”

Where does passion come into it for you?

“I’ve learned you have to love this more than, or just as much as, a girlfriend or a kid or a dog…You have to love it…Like for me, if I’m sitting in the room [and] the producers are just producing, and they don’t need me, and that’s fine. You’ve got to know when to direct your energy and just be low key….But then as soon as I sit on that chair and there’s a vocalist in the booth, it’s like I just took 10 shots of espresso. That’s immediate stimulation for me, and I think that’s how I know I like this job because I’m immediately turned on, in a weird way…

If the music doesn’t genuinely excite you, and you’re just looking at engineering as a day job, let’s get it straight, it is a day job, but if you’re going to look at it that way, then it’s not the right one. Because I get paid to make feeling out of thin air. Literally, I’ve been in sessions where after the whole session, after the song is done, cut, arranged, we’re listening to that final listen-back, and everybody’s crying in the studio. Like, if you’re not out there for that, then I don’t know. Because that’s what I do, that’s what I like to do.”