Two time Grammy-award-winning audio engineer and music producer Marc Moreau (Ziggy Marley, Madonna, Roger Waters, Rage Against the Machine) of The Root Studio has decades of recording industry experience and insight to share with those he trains as a Recording Connection mentor. Helping teach aspiring audio engineers and music makers to develop personalized workflows that work for them and incorporating students’ projects into their lessons are two hallmarks of Marc’s hands-on approach to education.

We recently connected with Marc to learn more about his journey into audio, pick his brain on engineering and producing one’s own tracks, and get his firsthand advice on how our students can set themselves up for success during their externships.

What got you into audio in the first place?

“I started like a lot of people, as a musician. Guitar was my main instrument but I played around a little bit on piano when I was younger. I remember as I was starting to try to figure out songs, I had this Beatles songbook. When I got it, I was so excited because I was like, ‘Okay, now I’m going to know what to play and have all the chords…The chords were kind of right, but once I learned it [I realized], ‘Well, this is not how the records sounds.’…So that was my first insight into all the unique things that go on in music, and variations on all the standard stuff…I would listen to the songs and play along to try to see what they were doing. Once I’d figured out the chords, there was this sound, and it was like ‘How are they getting that sound?’”

So many of us who are making our own music find it difficult to get their ideas out of their minds and into the songs they create. Can you speak to that?

“Technology has put an interesting twist on future producers and younger musicians…They’re wearing all the hats at the same time that used to be different people. For the most part, until computers entered the world, you had an engineer, you had an artist, and you had a producer, and they all had their roles. And in the best of times they would all complement each other and they’d come up with a great work of art.

And now with the technology, you’re all three of those. So you’re the artist, and you’re the engineer, and you’re the producer. It’s important to think about those hats as different ones as you’re working so that, for instance, if you’re in artist mode and you have an idea, you need to get that idea out as quickly as possible. Don’t think that you’ve got to then wear the engineer hat and go set up everything just perfectly as an engineer and take the chance that then the artist part of your brain just loses the idea.

Despite all the thousands and thousands of dollars of equipment that I have, if I have an idea, the phone comes out and the voice memo thing goes on and I capture it right then and there. Then you can go make it better with the engineer hat on. And then the producer hat comes in for perspective.” 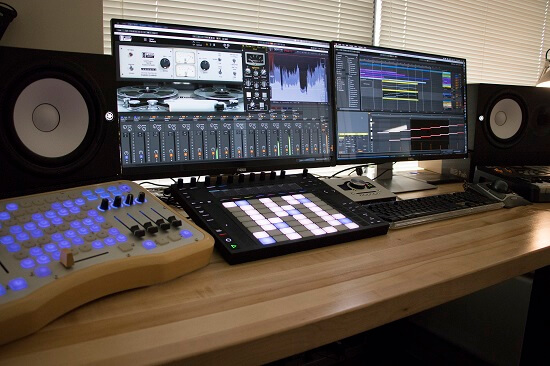 What’s your advice to students on how they can make the most of the program while they’re in it?

“I think making the most of it really is about the time that they can put into it while they’re there, fresh in the moment, and how they can apply it to their productions. Something I’m really big on is encouraging them to take whatever we’re doing within that week’s lesson, or sometimes we’re even talking about other things on top of that which are pertinent to their productions, and applying that.

I like to see when they come back the next week that they’ve taken that concept, run with it and tried some things. Because that’s just the best way of learning and having the retention of what you learned, and then also making it your own. Then that helps them with their workflow.”

Have any students who are really delving in and getting creatively invested in what they’re learning?

“One of my current students Nick Leupen, is a great example of that. He’s a composer/producer in the Ableton program and has an insatiable appetite for learning. He’s not only on it when it comes to the course work and being a great student, but constantly curious about tips I can give him for working with other artists, etiquette with clients and is always looking at the bigger picture of what he needs to know for his career. That’s a great sign of future success.”

What qualities or characteristics do you want to see in the students you train?

“The attitude of somebody who’s really open, ready to learn, eager to absorb the information and to put it into practice in their own work… Because all of the other techniques and things like that, you can teach somebody…The thing that I like to see the most is that they’re just hungry for getting to the next step, and learning more, and absorbing all of that. And I think that’s a great quality and attitude that will help take them far in the long run.

Curiosity is a big thing. When I see the students coming in, I love it when they’re full of questions like, ‘What’s that and why is that going like this and what’s going on there?’…And you see these lightbulbs go off, and then they go back [home], and the next time they come in the following week, their song that they were working on has just taken this huge leap. So that’s neat to see and that’s a great part of being a mentor, too. Being able to help them discover those things and take it from the academic part of like, ‘This is what this thing does’ to ‘Here’s how you could actually use it for the type of music that you’re doing’ and ‘Here’s where you could get creative with it.’ That not only makes their productions better, it makes them feel better. Then they learn it on a deeper level than just like, ‘Oh, that’s what that knob does.’”