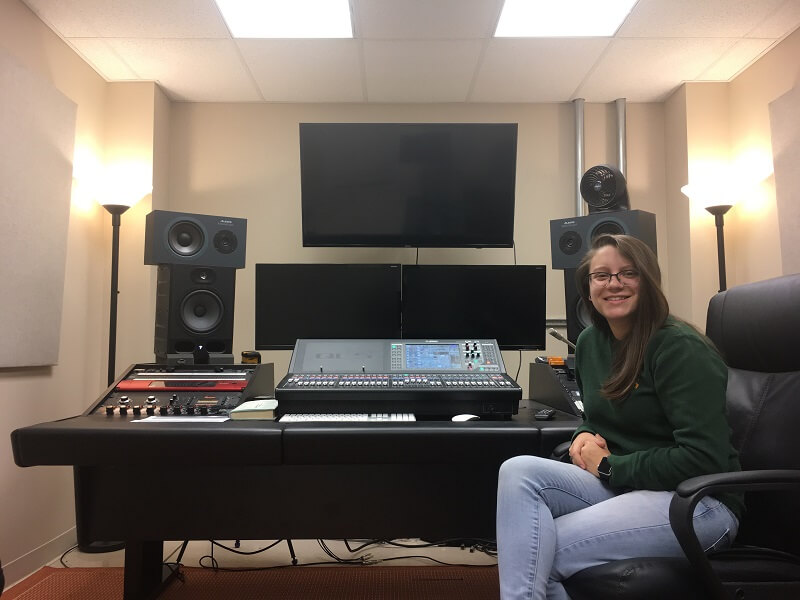 When recent graduate of Recording Connection for Audio Engineering & Music Production Alexis Schwarting, came to us, she had already completed several semesters attending a conventional university. Nevertheless, her drive to get in and get going in music led her to Recording Connection (RRFC) and consequently, to longtime mentor, Rick Rooney (Clay Aiken, Warner Bros, Interscope, Sony). Now, with a job as a broadcast engineer at a local church and a game-plan for building her future, Alexis is on firm ground, ready for all of the adventures ahead.

“My mom actually found [you]…I really wanted to find something quickly that was near me…We heard a lot of really good things about Recording Connection and that they find studios closer to you rather than [putting you] in a school. So that really interested me…

After high school, I started at UNT, University of North Texas in Denton. I went there for about a year and a half studying film and audio design in film. When I was there, I just realized that I mainly wanted to focus on production in the music industry itself. I was really drawn to music for my whole life. So that’s when I realized that I needed to go down that path and start working towards that and audio engineering as well.”

So you then went into longtime mentor Rick Rooney’s studio. What can you tell us about that experience?

“I went in, we did a little tour of the entire studio…then we sat down in one of his studio rooms, and he really just asked me what I wanted to do with this, what I had in mind, what I saw in my future for engineering. It really made me open my eyes as to what I was going to be doing there, that this was finally something that I was wanting to do for a long time. I definitely got really excited.”

“He was very hands-on and wanted to make sure that you knew everything that he was trying to get into you. It wasn’t just about taking some quizzes like it would be a lot of times in schools. It was really about, you know, ‘I want to make sure that you understand this…that you’re understanding what you’re doing outside of the studio, and when you’re at home and working on this stuff.’ He wanted to really make sure that you grasped what you were learning, and not just reading a book and trying to get by…He would be really hard on you about it, and I loved that kind of teaching. All throughout my life I’ve always had people that were very strict on me but it was always good. It helped me and it pushed me. So it was just nice to have somebody do that again. I didn’t get that much at UNT. It was a great school, but [they’re trying] to check boxes there. It’s a large university. You can’t get that one-on-one time there.” 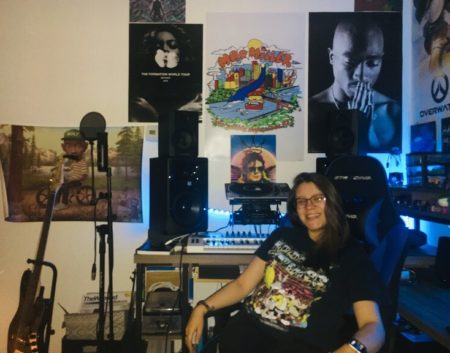 Alexis Schwarting in her home studio

How did the job working at a large local church come about?

“Actually my Recording Connection Career Advisor helped me find [it]…They were looking for a broadcast engineer. So I applied as quickly as I could. I went in for an interview, did a little tour of the church… [The person interviewing me] wanted to know what I was trying to get out of working there as a broadcast engineer. I told him I want to get working with as much audio equipment as I can, sit down in as many different studios as I can.”

Do you have other projects you’re working on?

“I’m working with a few people and I’m working at a good friend’s studio…With Rick’s studio, it was definitely more instrumental: drum sets, guitars, keyboards, vocalists. My favorite genre of music is R&B and rap and hip hop so working at my friend’s studio is definitely different than working with real acoustic instruments and getting that kind of engineering. Whereas, now I’m mainly working with producers who are making beats on their computers and trying to make that sound as clear as possible. And then working with those types of vocalists, too. Rappers are a lot quicker. It’s definitely different recording with them. So it’s a lot of fun learning that genre, too.”

So what are you focused on achieving right now in your career?

“Something that I definitely have always been passionate about is trying to help other artists do whatever they’re trying to do, because even though it’s really common now for a lot of artists to teach themselves how to do [production], engineering is still something that’s more difficult….I’ve definitely met a lot of artists who really needed something like that. So I just want to do that. I really want to step in and help them with that.”

How do you feel about the path you’re on now?

What’s your advice to Recording Connection students on how they can make the most of the program while they’re in it?

“Be at the console as much as you can, sit in that A2 spot, do as much hands-on work as you can to put yourself out there and to feel more comfortable in the studio environment. The more you work on putting yourself in front, the more confident you’ll feel in yourself, and the more confident the artists and team will be in you.”