Jamila Nicolas Finds her Passion (Unexpectedly), Gets Hired Doing What she Loves! 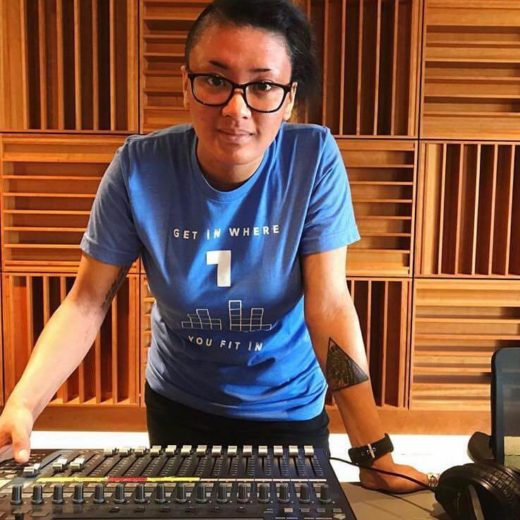 Recent Recording Connection for Live Music graduate Jamila Nicolas (Buffalo, NY) came to us for mentored externship with a very practical goal in mind. As it turns out, training with Jim Somner did more than enable her to meet her goal. In fact, it did nothing less than set Jamila off on a different path in life.

What were you looking to achieve when you first enrolled?

“So for a couple of years, I was throwing events, and would hire third party sound companies, and was never really happy with what I got. So, one day, I just wanted to do some research and maybe do sound myself…Long story short, I found my way to Recording Connection and decided to take the course. My life has pretty much always been surrounded by music. My brother’s a musician and we’ve always worked together. So the interest was already there but what caused me to find you guys was that personal research for the events I was doing.”

How did your mentor Jim Somner at LOFT Recording Studio approach your externship?

“Training with Jim was definitely an unexpected thing. When you hear that you’re going to be working with a professional audio engineer, you think it’s going to be about like celebrity status or whatever. But in fact, it was like the complete opposite. It was more serious and life changing than that. He basically taught me how to look at things the proper way when it comes to the music industry instead of [it] being glamorized.

I personally think, he started off training me the right way, with analog stuff, on how everything started when it comes to recording and music. He said, ‘We’re not going to get right into recording. I’m going to show you how it’s all made.’…I learned how to build cables and how to route them, and how to develop equipment and whatnot, definitely something I didn’t think came with the job. So that was really cool.”

Jim also had you shadowing him at live venues. What was that like?

“[Early on in the program] he mentioned being in a band and doing shows all over the city. He told me to come to one of his shows and learn how to live track and mic a live band. I was expecting around 20-30 people, you know, something small ..like a hobby band type thing. Anyway, when I showed up… the venue was gigantic and actually ended up having around 300 people attending. I was surprised to find out how famous they are in the area and how freaking awesome he is on the keys! I was just so used to him being my mentor/teacher and not this Western New York famous audio engineer and musician who rocked super freaking hard and has a huge fan base… [Later on in the program] everyone was so accepting of letting me shadow them and even work their board because he was so well-known as an amazing musician and engineer.”

Was Jim able to help you through specific challenges you faced during your externship?

“Jim was really good at recognizing when I came across something difficult to understand. If something wasn’t clicking he would change his strategy multiple times…For example, I had a hard time learning routing…When he realized the book material wasn’t sticking, he pulled out a dry erase board and had me do a drawing of inputs and outputs. And to further my learning, he decided to have me physically route processors to boards, microphones, etc.”

You recently got hired. Tell us about that.

“I got hired at Buffalo State College as their A2 at Rockwell Hall. So they have national acts that come in, and plays, and operas and stuff like that [which] I run the sound for…I use different boards and stuff, I use the SC48 [Avid Venue console] and Midas M32R…So I basically just run the sound there. I do the mic’ing, stage tech stuff, stage managing, really all of the production.”

At the start of this interview you said the experience has been ‘life changing.’ Could you elaborate on that?

“When I started taking the course at Recording Connection, I actually found a different passion. I realized how much I love live sound and audio…I think I really want to stick to live sound engineering and work different venues and do festivals and stuff like that.”

As a woman in live sound you’re definitely in the minority. Ever had to blast through the stereotyping or stand up for yourself?

“I have run into situations where they don’t treat you as an equal but then, you learn from Recording Connection and my mentor, and I have the knowledge. When you educate someone that’s being condescending, they’re like, ‘Oh, shoot, they actually know what they’re talking about!’

But for real, it’s like, ‘Come on, you know, we’re all human. Women are more than capable and they’re so extremely intelligent…It’s pretty badass to be one of the only female engineers out here because people are like, ‘Wow, that’s really cool.’”

What’s your advice on how Recording Connection students can make the most of their externships?

“Understand that in sound, anything is possible. There isn’t one set way [to do things], and to try to understand that there are so many different possibilities in working with it, and that you have to be pretty creative. And other than that, I would also say that networking is key. Get yourself out there. Don’t be afraid. Meet new people, try to get as many jobs as you can, intern, whatever… I think the most important thing in this is definitely who you know and just putting yourself out there.”