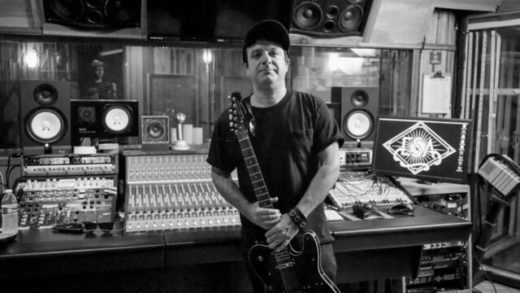 L.A-based guitarist, producer, and composer Joe Dancsak came back to Recording Connection more than a decade after completing Recording Connection for Audio Engineering and Music Production. When he’d first enrolled, Joe was finding his way. Cooling his heels after being on the road as the lead guitarist in a rock band poised to go big, Joe’s early experiences in Recording Connection enabled him to learn the ins-and-outs of working inside of a professional recording studio environment. Since that time, Joe’s built himself an enviably good career. When he isn’t working with bands and artists, he’s getting his music placed in film, television, and commercials. When he isn’t doing that, he’s writing his own music, laying down beats and creating backdrops, melodies, and hooks to add to an already vast catalog of work.

Naturally, we wanted to garner some of the insights Joe has to share as an established professional who’s come back to Recording Connection with a clear view of his goals in mind.

So what led you back to us the second time? What were your specific goals?

“I’d been doing a lot of film and TV, a lot of sync placements but when I was doing major label pitches and label pitches in general, I was definitely getting a lot of notes back that the production needed to amp up a little bit…The mixing and mastering needed to modernize…Now that I’m listening back to it, I can hear where I was doing things right and where I was doing things wrong. So I decided to up my game as an engineer and add it to everything I already know as a producer. Really, I felt like I was at 80% in my engineering. I’m getting a lot closer to 100% now. So that was really what made me want to go back into a program…

One of my other goals is to be a project manager or in A&R at some of the labels or publishers and licensing companies here in Los Angeles. Getting a bit of experience under the roof at a place like ES Audio is just absolutely invaluable because you’re seeing it in action… you’re realizing what you need to do to be a part of the team and [understand] how the machine is moving.” “From the very first week that I was there, you know, I had come in with my own [music]…[Donny] started hearing my work and thought it was really good, and we just all started talking right away about collaborating on stuff that we could pitch to major artists, pitch to labels, pitch for film and TV and K-pop and all that kind of stuff. We’re all on the same page in that we all want to do really great work and have that stuff get out there…Donny’s at the top of the food chain as far as someone who can mix and master, and Junior [Uriel] is one of the most skilled engineer/producer’s I’ve ever seen. So I’m thinking to myself, ‘If I can combine what I already know with the exceptional skillset that they have… while I’m there anyway, because I’m being taught, who knows? I can make a big hit out of the place.”

It seems like you always have your eyes open, looking for opportunities. Is that fair to say about you?

“In a place like Los Angeles, you should always have your eyes open because it’s a small town and a small number of people that all kind of know each other, but it’s a very big machine…It’s its own universe, especially in pop. They’re just pumping out songs and there’s always a need for great music—always. So your job is to always be making it, which I’ve become accustomed to because I’ve been at it a long time. So, then when I wind up in a collaboration like this and they say, ‘What have you got?’ I’ve got stuff stacked. I’ve got 12 songs deep that I can show people. And then they can move really quickly because once we get into the mixing process of a song, it doesn’t take very long because they’re doing it all the time.”

What can students do to make the most of their externship experiences when they’re in one of the Recording Connection programs?

“The first time I did it, I was there quite a bit, but I probably wasn’t at 100% because, you know, you’re thinking of it like it’s school. And you go to school and you try to get your work done and go home and go have fun with your friends, right? And this isn’t that. This is more like you’ve made a decision to make an entire lifestyle change. You’re going to spend way more time in the studio than you would at some job, and you should be doing that because you really love it, you know? You really, really have to make records all the time, or you have to work in post, or you have to write songs, like you don’t have any choice. If you’re that kind of a person, then all of that time just flies right by. I’m there sometimes seven or eight hours, and I look up and I haven’t eaten. I’m like, ‘I’ve got to go eat, I’ve got to go home,’ you know what I mean? It’ll whip right by you.

So I would say for the young guys and girls coming in, tell them to really plan on digging in and being around their mentor as much as they can without being a hindrance. Knowing when to be there, too, like you know when times are a little slower and the mentor can have time for you, will help you have more hours there. Then other times, when they’re very busy and have clients, ask if you can shadow the work. I think those are all things that will help people really understand what they need to do in a recording studio.”