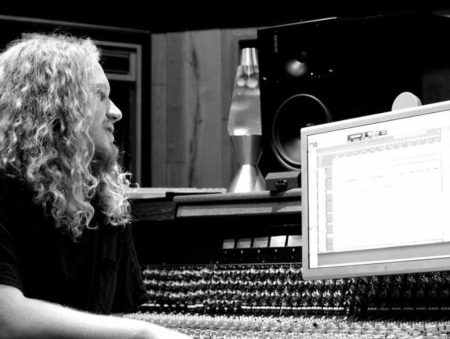 For Recording Connection graduate Blake La Grange, the path toward music industry success was nearly inevitable, not just because he knew early on what he wanted to do, but also because he found the passion and drive to defy conventional wisdom, when necessary—which is partly what led him to the Recording Connection. Today, he’s a successful mixing/mastering engineer in the process of building his own 2-story studio in San Diego!

Blake says the choice to pursue engineering and producing came as early as high school. “I knew I wanted to do music fulltime for a living,” he says, “but at 15 or 16, I had a sudden realization that I don’t think I’ll be able to ever make a living doing what I’m doing unless I’m on the other side of the glass. So that’s kind of the lightbulb that went off.”

Once the decision was made, Blake’s approach to his own education took a drastic turn.

“I looked at the last two years that I had left in high school,” says Blake, “and I saw all the classes that I needed to do, and I realized a lot of it was elective and a lot of it was a waste of time. I already knew what I wanted to do. So I just figured, how can I do that as soon as possible? I knew that I needed to get out of high school, so I studied really hard and I actually graduated high school in two and a half years, and as soon as I was done with that I said, ‘Okay, what’s next?’”

Blake quickly realized his answer didn’t lie in college courses. “The next step basically was to get into a studio,” he says. “I knew that was the next thing, just to kind of double down and finally get inside of a recording studio and basically show that I know what I’m doing to a certain extent…I was looking at a lot of colleges because that’s sort of what you’re told. You have to go to college, get a job, all that stuff, and I didn’t think that that was the best way to go about life, especially not in this field. So I just did some research and found the Recording Connection, and what really jumped out at me was I had an opportunity to get in the studio basically day one, which is what I knew I needed to do.”

Blake enrolled and was placed as an extern with Recording Connection mentor Steve Wetherbee at Golden Track Studio in San Diego, CA. Not long after, he says a second “light bulb” went off in his head.

“I just knew that there was going to be a turning point where I said, ‘Okay, how can I do this for a living?’” he says. “I remember after a few months doing it, I got comfortable with the board and got comfortable with the gear, and again another lightbulb went off. I said, ‘If I bring a band in here and I know how to run the studio, then I think I can get paid for this.’ So that’s kind of the ‘ding ding’ moment. So I quit my job and just went hard trying to get bands in there.”

The studio owner also took note of Blake’s progress and gave him a green light. “The studio owner told me, ‘It looks like you know how to run the studio. If you bring a band in here, then they’ll pay you to do it, as long as the studio gets a cut.’”

Motivated and determined, Blake resorted to working for cheap and using early forms of social media to start filling his schedule.

“All the people that I brought in first were my friends—all of my friends’ bands I brought in,” he says. “I let them know the studio rate, and once I realized that that’s how the business was, that the studio rate exists and then the engineer rate exists, I just gave them a severe discount so I could get them in the studio and learning some more. So at first, it was friends, and then quite honestly—this is back when Myspace was hot—I made a Myspace page for the studio and I messaged something like 3,000 bands in the area, basically telling them that I have a new discounted rate, because I was doing everything for super cheap. And that basically booked me for three or four months.”

Blake never looked back. Since that time not only has he learned how to book himself solid, he’s also gotten the opportunity to work with a number of big-name artists along the way, including Lil Wayne, Kanye West, P.O.D. and members of Cake, to name a few. He also began carving out his own reputation as a mixing/mastering engineer.

“I really found my niche was taking something that was already recorded and getting it to the next level,” he says. “So instead of going from zero to one, going from one to two. Once I realized that, I took everything I learned from the studio, from the experience, from my mentor, from the artists I worked with, and I took a step of faith and said, ‘I think I can do this on my own and that I can maybe build my own studio or my own brand.’”

That decision ultimately led to Mercury Mastering, Blake’s new San Diego studio. “I’m remodeling and building it now, a two-story full production studio,” he says. “It’s just all at really one critical pivot point, kind of the next level. So that’s my main mission now, is to just get as many artists, bands, anybody who needs mixing and mastering excellently, to get them in the door and out of the door and to have a really fun process. And it’s great, too, because I have people working with me and for me, and it’s just cool to see things full circle, that now I get to pour into others because somebody has poured into me.”

Looking back, Blake realizes he was able to streamline his success because of the choices he made and the opportunities he took—especially where his training was concerned. He keeps this in mind since soon he’ll start taking on Recording Connection externs himself.

“In this field, experience is way more important than formal education, period,” he says. “I think there’s this mentality, especially with millennials, where you get out of high school, you go and get a bunch of student debt, you go to college and study something you don’t really want to study in hopes to find a job where you work for somebody else, and then you pay a bunch of taxes and you trade your time for money…Once I realized that this industry wasn’t really like that, that it was really yours to lose and you kind of build your own hours, and you go and find work, and it was much more dynamic, it really appealed to me more. I started to realize that the best way to learn this is to get in the studio, be with a mentor, get experience, get your hands dirty, and that will teach you way more about this field than it would if you were to sit in a classroom.

“Conventional doesn’t necessarily mean the smartest choice,” Blake adds. “I wouldn’t have traded anything for the world, I wouldn’t have done anything differently. I’m so glad I didn’t get into a bunch of student debt and go to a school where I’m having to pay back tens of thousands of dollars in debt in something when to really kickstart this whole thing, I just needed to be in the studio with a mentor and gaining experience.”