From New York to L.A: Recording Connection student James Boucher is All In 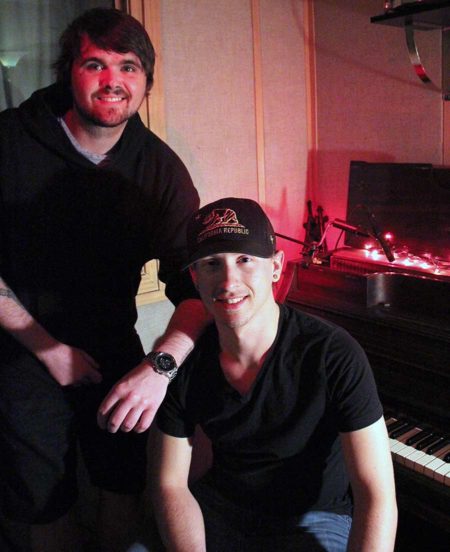 One thing that stands out about Recording Connection student James Boucher (Venice, CA) is that he takes his time making major decisions—but once the decision is made, there’s no looking back. As we’ll see, it’s just that sort of mindset that makes him a prime candidate to be a success in a music industry career.

James’ journey into audio engineering and production began at the end of a two-year stint at college, where he earned a two-year degree in electronic media communications, but knew he needed more.

“After taking time off of college, I decided that I really wanted to pursue my music further, in a more professional way,” he says. “So I started looking at opportunities and schooling, and I first looked at some academic schools. It didn’t seem that they were going to provide me with the required hands-on experience that I think is necessary for music production. And as well as me being a hands-on learner, I thought it was more beneficial for my future for me to get in the studio and to really start doing things.”

But even after finding the Recording Connection and talking with the admissions team, James waited nearly two years before deciding to jump in. “After reading and speaking with several different people, I did take time to take a serious break and to think about if this was the best decision for myself,” he says.

During that time, however, James was anything but idle. “I worked for two years at a cafe as a manager,” he says, “and I just worked hard, saving up every dime I could just to be able to have savings to move out here to pursue it.”

Once he decided to enroll in the Recording Connection, James went the extra mile, in a literal way—not only paying his tuition but also deciding to move cross-country from New York to do his training in Los Angeles.

“Moving out here was definitely a transition,” he says. “It was not only just a new experience for me, but it was a journey because I had to relocate from New York. I drove cross country for a week straight, and moved my first place to L.A.”

James was placed as an extern at Studio 1 Zero in Los Angeles, to be mentored by Grammy-nominated producer Eric Denniston (Carole King, 50 Cent). “In the beginning, it was definitely a little nerve-wracking, he admits. “I think especially when you’re just getting to know someone, there’s a level of uncertainty…[but] the first day it was a very welcome environment, open atmosphere, and things just sort of hit it off.”

Eric’s mentoring approach definitely gave James the hands-on experience he had been looking for. “What I really like about his style of teaching is that he gets everything sort of started,” says James, “he puts you in at that point to where you’re at the session’s beginning, and now you just have to begin. And you’re basically showing him where you’re at with the program…He answers questions when they’re asked, even the ones that you might think are stupid. But he’s very positive…He’s also not afraid to tell you when you need to improve in this area, or if something’s lacking. It’s a perfect mix of ruling with an iron fist, but also having grace and patience.”

In addition to James’ studies, Eric’s also got him honing his skills on actual tracks. “I’ve been working on a couple of projects at the studio, because I’m actually a little bit ahead of the program…So a couple of the early weeks, he’s given me a couple projects. I just got done mixing one of his songs, and actually got a pretty good report from it, you know, with his hand and guidance on certain things. I’m grateful to have him tell me, ‘Good work,’ at the end of it.”

Meanwhile, since making the decision to pursue his career, James is wasting no time. He’s working on some projects of his own, thanks to the connections he’s made since moving to L.A. “About four months ago, one of my friends that I met from Venice, she’s an artist, she wanted to come over to do a song,” says James. “So she freestyled over one of her friend’s EDM tracks, and that was pretty cool…And then I have some of my own projects that may lead to further work in the future with some other friends that work for Sony and a couple other animation companies.”

Having now worked on his externship for several months, does James have any advice for others considering the program?

“The best advice I could give…is to just really have a passion for what you want to do,” he says, “and know that what you’re getting involved in is going to be a great decision, but it’s not going to be handed to you. You have to put the work in, you have to be responsible, show up early, meet deadlines, and there’s even etiquette for being in the studio. You have to act the right way, and it’s all a matter of providing the greatest service for your client. So I think the Recording Connection puts you in a great position now to learn all of these things before you’re in the real life situation and make the mistake that might get you fired.”

As for his own choice to make the move to L.A. and pursue his music career…even after waiting nearly two years before jumping in, James not only sees the value of his decision, but also understands how his mentoring is helping him move toward his goals.

“I think everything has an extent of nerves attached to them,” he says. “But if we can convince ourselves to step off that ledge or to grab that hand that’s reaching out, and to accept the help and not sit there in our own pride, but to sit there and take it with a grain of salt and allow people to critique us and correct us, and use that to our benefit…It’s all about putting the right people in your life that are going to want the most and the best for you.

“It’s been one of the best decisions I have made,” he adds.