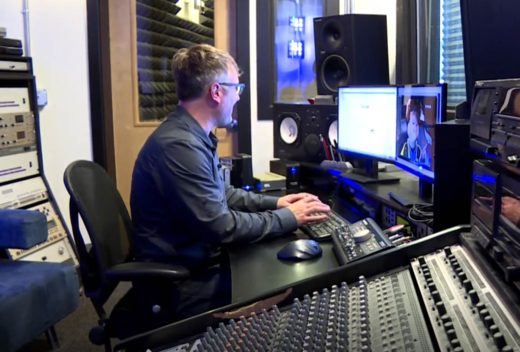 Not only is Recording Connection mentor Jake Johnson an industry veteran and a master of his craft, he’s been mentoring students with us for more than a decade! Operating out of the studio he co-founded—Paradyme Productions in Madison, WI—Jake places a high value on learning on-the-job. Also, as you’ll see in the interview below, he sees his students as potential employees, and one of his earliest students still works for him! Below, Jake talks about how he got started, weighs in on issues like opportunities for women in audio, and offers key career advice for students on how to be an asset to the studio. Enjoy!

RRFC: Can you give us a brief look at your background? How did you get into audio and music as a career?

Jake Johnson: So I was in bands and I was doing a lot of the techie stuff for the bands I was in, and this was back in middle school and high school, and basically setting up mixing boards and doing live sound, and sort of that thing… I’d recorded at a few different studios with my band, and one of the studios we were at, the guy basically didn’t have as good an ear as myself and a buddy of mine who were in the band…He said, ‘You know what, I’m really good at recording drums and guitars. Would you guys come in and help me out at my studio working with these vocalists in these different bands?’ This was the early 90’s, and at that time this was the Madison music scene, very, very cool and kind of up-and-coming. The next thing I know, I was in college and I was working as much as I possibly could in the studio just recording vocalists, because I guess I was just a natural producer in terms of my ear and hearing harmonies and giving advice on singing, just having been a singer for years. So I was in college for genetics. I was going to a four year school for a genetics degree, and successful at it, but also doing this all my time, and then I had to turn down sessions…I was going to be, you know, a genetics researcher, and then all of a sudden it dawned on me…‘Wait, why am I trying so hard to do this genetics thing when [music] is really what I’m awesome at and I really love it?’…So then I switched over and I got a business degree, and I ramped up my hours and worked 60 hour weeks during the summers and 20 hour weeks during school, engineering, producing, working on tons of albums, and kind of the way the local scene was, everyone talks to each other, and I was in a band and talking to people from Chicago and from Milwaukee and all that, and I was super busy from the get-go.

RRFC: So how long have you been teaching with us now? 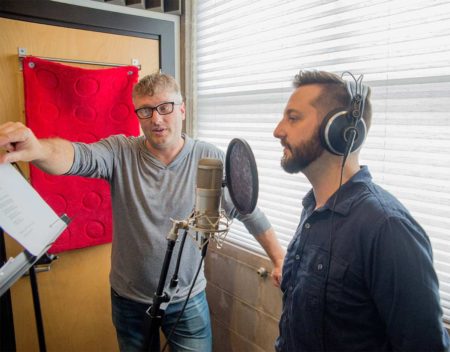 RRFC: Wow. And what made you decide to be a mentor?

Jake: I enjoy teaching, I enjoy the personal interaction and working with younger people, but honestly, I can say from the beginning, to train an employee, especially a young employee, takes a lot of my time. And I’ve gone through that process several times…but then I can’t quite give them something to work on, like an actual paid project, because, you know, I can’t hand off my stuff to someone less competent. That’s always been a struggle, and so I would really invest a lot of time in a young person and then I’d find out, ‘Well, they can’t quite cut it.’ The Recording Connection was a great way to bring in someone, provide training, provide input. So from my perspective, I’m feeling them out as a potential employee the whole time we’re doing this as a program, and giving them some little odds and ends and seeing how they do with it. And I mean, I love the one-on-one concept. I think, as far as teaching goes, one-on-one is where most people learn the most, because then you can cater that to them, and that was the other side of it that I like…Reading a book and going through an academic program doesn’t always give you the on-the-job stuff you need, like how do you communicate with a client, how do you communicate with an artist, how do you resolve conflicts? Those are the kinds of things that you don’t see in a book, but that once you’re part of a program and you see that process happening…I mean, that to me, that’s how you should learn, on the job.

RRFC:  Let’s imagine that I’m a somewhat shy 20-something year old who’s very motivated to do well, how I can do a better job of making good choices when I interface with other people as an engineer? What would you tell me?

Jake: There’s one thing that I’ve done my entire career, and I find clients love it: I don’t answer the phone during my sessions. The phone will sit there and ring, and I shut off the ringer and I don’t do it. That’s their time, they’re here for their time. I can check voicemails later…

This is just kind of a personal philosophy…but showing vulnerabilities is a sign of maturity. It’s not, you know, if I don’t know something and you don’t understand something going in, be the first one to tell a client, ‘Well, tell me more about that,’ asking questions and kind of approaching life like a constant learning [process], you’re learning every day. Even though I’ve been doing this for over 20 years, I will learn new things all the time…Just don’t be afraid to ask questions. …[don’t] be the person in the room who pretends to know everything, because that, to me, it’s really off-putting, especially when it’s pretty obvious when someone doesn’t.

RRFC:  Yeah, absolutely. And all of the greats, that’s what they always say though, right? They always tell you, ‘Hey, I’m always learning. It is always a process of discovery.’

Jake: Yeah, exactly, and there isn’t one answer to anything. There’s multiple ways to get at something. And to admit when you’re wrong, I mean that just goes along with what you’re saying. I’ll do that when we’re producing a session. ‘Hey, try this harmony. Try it on here.’ [And then] I’m like, ‘You know what, I don’t like it. I liked it better without it.’ And to be able to take that step back, to me, shows your clients that you’re willing to try things and you’re willing to admit mistakes, which then they’re willing to do that, too.

RRFC: So are there any notable students or graduates of the program that you’d like to mention?

Jake: I hate to say my favorite, but I mean, Tricia was the first student that went through the program with us here, and she’s still employed here. That was over 10 years ago. At that time her last name was Datama…Now she’s married and it’s Tricia Mindham…She’s in here a few days a week, and just an incredibly organized person, great social skills. Her word means something, when she says she’s going to do something, she does it, and [is] really, really good at that. Give her a complex task and she’s really good at figuring it out. She was one of those kind of students who really understood, ‘Hey, I want to do this one-on-one, I want to go in-depth, I’m going to ask a bunch of questions.’ And of course she’s still here, and I wish I could have more hours out of her now.

RRFC:  There are so few women in audio. Do you have any insights on that? How can we change things? And do you think things are changing?

Jake: I’ve noticed that also, and over the years I’m like, it seems like two thirds of our clients are women, and it’s totally true. And I was like, ‘Why is that?’ Well, we’re a clean place, we’re a professional place. A lot of the other places and studios where I worked are kind of dingy rock n’ roll studios where the bathroom is untidy and all that…Maybe it’s just that I’m good at interacting with women, or we as a team are good at interacting with women. Or maybe it’s that we’re embracing that more…I don’t know what it is, but for some reason, we’ve been kind of a go-to place for a lot of female artists in town…I mean the trend is definitely shifting.

RRFC: What advice would you offer to students besides what’s in the book? What should students ideally be doing, even if it’s not in the curriculum?

Jake: I always tell the students when they come in [that] the best way to get a relationship with a studio is to bring in work. That’s what they want. They want you to bring in work…[Also] having gone through from the other side of a project, being the client, is a really important thing, too. Not everyone has done that, because not everyone is a musician, not everyone is in a band. So even a friend who’s doing a recording project, you could just sit in on a few of their sessions. See what it’s like, because I think people’s vision of what the job is, and what it really is, are two very different things…The other [bit of advice is] is be there to help. Understand that offering assistance, however small it is, ‘Hey, can I help load your gear in? Can I give you a hand with that? Hey, is there anything else I can do?’ I love that one, when someone says that. ‘Hey, is there anything else I can do?’ and I’m like, ‘I hate to say it, but do you mind sweeping the floor out there? It’s been a week since it’s been swept,’ and they do it…Be there to help, whether it’s with an artist or whether it’s with the studio or whether it’s with anything in life, because you learn a ton from doing that. Plus, you get a lot of people on your side.