For Recording Connection mentor Wyatt Oates, Being Proactive is the Prerequisite Recording Connection mentor Wyatt Oates is a busy record producer in Atlanta’s happening music scene, working easily with major artists as well as helping to develop new ones. He is a co-founder of Madison Studios, along with Tanner Hendon, the combination indie label and world-class recording studio that has hosted such names as Justin Bieber, Blackberry Smoke, Collective Soul and many others. As one who has been mentored himself, Wyatt is also a huge fan of the mentored-externship approach and eagerly looks forward to helping up-and-coming producer/engineers get their start.

Talking with Wyatt, you quickly understand that two of the things he looks for in externs is a good attitude and a willingness to be proactive. In a recent conversation with RRFC, he elaborated on good studio protocol and what proactivity looks like. The best nuggets of that conversation are mined for you below.

ON HOW HE GOT INTO THE MUSIC INDUSTRY:

“I played in bands in high school, and we would make our own records as well as we knew how…Being from a small town, I didn’t really know of jobs in the music industry. So when I heard you could work in the music industry, I went for it. I asked one of my teachers [at audio school] about a couple of studios in Atlanta…they told me the two I wanted were the two I would be able to get into. So naturally, I applied to both of them. Got into one of them as an intern, and worked my way up to Senior Engineer and Producer…now, I’m helping run Madison Studios as a record producer.”

ON THE INTERPLAY BETWEEN PRODUCING AND ENGINEERING:

“People think of audio engineering as the technical side and producing as the creative side, but they overlap so much. There’s not really a clear distinction. To produce your own records, you have to engineer them to some extent…I started out engineering and it made more sense to get in doing that, and learn the technical side of it first. Then [I] segued into producing once I had worked with a lot of producers and learned some of the tricks of the trade.”

THOUGHTS ON THE DIFFERENCES BETWEEN ANALOG AND DIGITAL, AND HOW/WHEN HE WORKS WITH EACH: 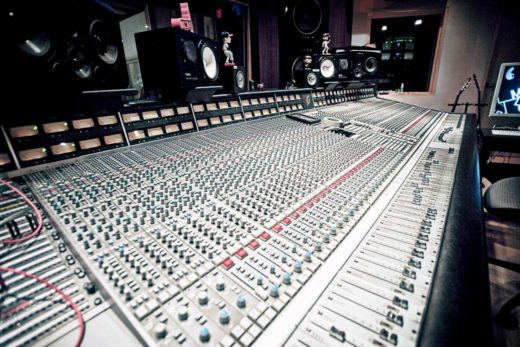 We have a 72-Channel SSL G-series console that we got from a studio called Southern Tracks here in town. So it’s had everything from Bruce Springsteen to Incubus to STP’s records made on it. It’s had a lot of cool records run through it. So we use it every chance we get…If [the artist is] looking for that sound, a lot of times it makes sense to track everything through the console and outboard gear to soak up some of the analog warmth because, for time and cost purposes, editing and a lot of the mixing and production needs to happen digitally, inside of Pro Tools…If the record budget can afford it, there are a lot of them where we would mix it on the console as well. Same thing with recording to analog tape. It does sound different. It’s cool, but it’s just expensive and time-consuming. Most people want everything now, now, now, and time is money, so we try to find the best way to capture it. And for that reason, I won’t just track through the board, I’ll compress and EQ, and I’ll manipulate the sound, committing that to Pro Tools so that it’s stuck with the record, even if, say, I don’t mix it. People notice that sound. I’ve done it pretty much straight digitally and just kept it flat. Then [I’ve] done it through the console, and the console wins every time.

CURRENT PROJECTS IN THE STUDIO:

A couple of artists that we’re working with, Chelsea Shag—we’re working on a new EP for her—and a band called The Stir, another one called The Future Babes…Just really cool, fresh, new material. Chelsea’s got kind of a pop/neosoul with some rock mixed in there. So it’s beats mixed with real instruments mixed with horns, and she’s an amazing vocalist. She’s gotten pretty big in the last couple years in the Atlanta scene, and we’re looking to give her a national presence as well here, pretty soon. And the bands are both awesome. So it’s just cool new stuff that’s not really happening a lot in popular music right now.

ON WHAT HE LOOKS FOR IN AN EXTERN, AND HOW POTENTIAL EXTERNS GET HIS ATTENTION:

The very first thing would be being on time. The next thing I’m going to notice is attitude…and then just walking through what they’re trying to do, try to get a feel for. Are they trying to be an artist, an engineer, a producer, or are they really not sure? I’ve found with mentees that I would rather turn them away if it wasn’t the right fit. For example, if they are really into post-production, like for film or TV, we do a little bit of that at our studio, but I know a friend here in town where that’s all they do. So I have referred a couple of my prospective students to him just because it was a better fit for the student. So I really try to dig into that pretty quick with them.

ON PROPER STUDIO ETIQUETTE AND THE IMPORTANCE OF BEING PROACTIVE IN THE STUDIO:

A good, safe starting point is being a fly on the wall, and don’t interject your opinions into what the producer is doing, for example. It’s just bad form. Don’t solicit to people right off the bat if you have your own music, your own productions…Treat them like normal people. Don’t be overzealous…Obviously, introduce yourself, and if they seem like a hand-shakable person, shake their hand or whatever the proper greeting is in that culture, and don’t overdo it…You should sit either at the console or back of the room, you know, leaving the sweet spot, so to speak, for the producer, engineer, artists. And just hanging out and paying attention…trying to be as proactive and predict the needs of the artist, producer, and engineer as much as possible. So if you hear that somebody is coughing and is obviously thirsty, then offer to run and get them a water, and go do it. I’ve seen a few people fall into the trap of putting their headphones on and just rocking out to some music while they’re in session. And obviously, with that, you know, you lose a lot of opportunities to be proactive and to really help the session along. I guess how I’d sum it up is, help the session along. During a recording session, do everything within your power to help the session along…There’s nothing better than when you need to ask for a mic to be set up and it’s already set up on the stand. So yeah. That’s how you know you’ve got a good one. ON HOW SOCIAL MEDIA SOMETIMES GETS IN THE WAY IN THE STUDIO, AND HOW TO FIND A BALANCE:

I understand social media is important in today’s landscape but I’ve seen it get in certain people’s way where they would have gotten opportunities and they missed legit paid work because of it. Now, on the flip side, even Gen X or older artists, we might get done with a session and they want to take a picture with the console for their social media. I mean, that’s just part of the landscape today…A lot of kids, for example, or people will come in and they try to start taking pictures on the film set or in the recording studio right away, or God forbid FaceTime or SnapChat it when you’re in the middle of a sentence, literally. So I think people coming into the program, if they just kind of take a look at their priorities—you can obviously have a wonderful social media presence and still go to work every day.

ON WHY HE LIKES MENTORING FOR THE RECORDING CONNECTION:

I’ve always loved the mentor-mentee model. I came up through it myself. That’s how I learned engineering, producing, songwriting, all of that. So anytime I got a chance to help an intern or an assistant engineer up under me along the way, I always did…So when I found out about the Recording Connection and one of the guys called me from there to see if I would be interested in mentoring, I jumped on it…One of the things that I thought was really cool about the Recording Connection was the fact that you guys do focus on that model. I’m just a fan of it because it works. The real world experience is always better than classroom experience for these kinds of careers.

BRAGGING ON A COUPLE OF HIS EXTERNS:

Every student’s different, but I’ve got two star students right now, Tom Belau and Desmond Dyer. They’re both really good. So it’s been a cool experience. It’s good to be able to help move somebody’s career along when they’re really passionate about it…Both of them come in with an open and good attitude.

HIS TAKE ON THE CULTURE OF MUSIC TODAY:

The democratization of the music industry, the Internet and streaming and just everybody being able to get their music out to everybody else, I feel like, is crossing all the genre boundaries. When you listen to top 40 radio now, you’re hearing what 10 years ago might have only been heard at a rave with Alessia Cara singing on it, and…on a hip hop station or country station you’re hearing a couple of genres on there as well. I feel like that’s only going to get more cool as time goes on. I feel like the only people that are not cool with that are people stuck in their old ways.

For Recording Connection mentor Wyatt Oates, being proactive and working hard is the prerequisite. Can you bring it?