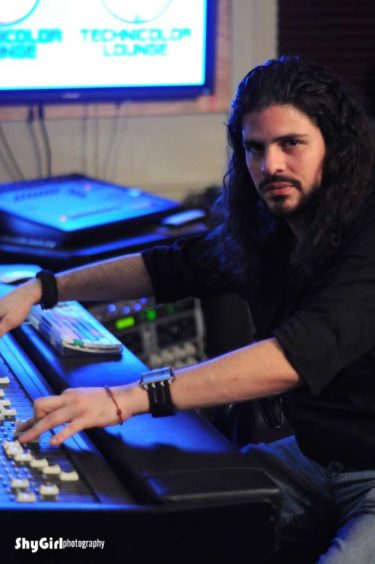 As co-owner of the legendary Miami Beach Recording Studios, a historic facility in the Miami music scene, Recording Connection mentor Pablo Reynoso has worked with a lot of notable people in his time, with names like Rick Ross, Lil Wayne, Flo Rida, Styx and George Thorogood on his studio’s list of clients.

A dedicated music industry professional and graduate of the prestigious Berklee College of Music, Pablo is passionate about teaching, and makes a point of giving Recording Connection students the hands-on instruction and experience they need to make it in an ever-changing industry. In the interview below, Pablo shares a bit of his personal journey, weighs in on the balance between producing and engineering, and talks about the importance of wearing multiple hats in the current musical landscape.

RRFC: So what was it that first led you into music as a career?

Pablo Reynoso: I kind of always knew that I was going to be a musician and that I was going to end up doing this for a living…I got a guitar when I was six years old. And even before that, from then I kind of grew up always listening to The Beatles and The Rolling Stones, Led Zeppelin, later on Black Sabbath, kind of getting more into the rock stuff. But The Beatles for me was like the greatest thing ever, and I learned so much out of that, and partly also maybe developing my ear as a musician and as a producer just listening to those records over and over and over.

RRFC: And at what point did you decide you wanted to focus on the audio part of it?

Pablo:  I always played with bands, and I realized early on that no matter how good you were and how much you practiced, if when you played live, if the sound guy wasn’t on top of his game, then it didn’t matter. It was just like a personal thing. You can say all you want about tone, but if the guy sucks, your tone is not going to translate. So I was curious about that because I wanted to sound good. Then I got involved in that and I got involved [in sound] in my church…I had to be the first one there so I could set up, and the last one to leave so I could break down. So I kind of learned that and the live sound aspect of it early on…I enjoyed being in the studio creating, working and coming up with new ideas and songs, or getting a project and being able to morph it, to change it, and to work on it. And a lot of the records that I really liked and the bands like Pink Floyd and The Beatles and stuff, the stuff that I really liked the most was done in the studio…So I just kind of stopped playing live and jumped more full time into this.

RRFC: Do you see yourself more as a producer/engineer or as an engineer/producer? Which is the priority for you?

Pablo: I wouldn’t really box it in. I look at it on two different sides, because the production is more of a creative aspect, and it’s more about the sound and the feel of a song or record, and maybe the people involved. So it’s like the colors and the palates of colors and other things before the painter comes in. That’s kind of the realm of the producer. Then the engineer is really just kind of capturing all this stuff…A producer that engineers or an engineer that produces, I think that what really matters is what the client, what the project needs, what it’s looking for…It really just depends. It’s good to wear many hats, I think, nowadays. I mean for the most part, engineers should also know how to produce, because if there’s not a producer in the room, then really they’re in charge of what’s going down to tape or to Pro Tools, whatever, what’s being recorded.

RRFC: So would you say it’s important to be multifaceted nowadays to work in this business?

Pablo: Oh yeah, more than ever…I think that nowadays you really do have to ground yourself, and not just as an engineer or producer or a music man, but also a businessman, marketer, so many other things.

RRFC:  So tell us a bit about your studio. There’s some history there.

Pablo: My studio is Miami Beach Recording Studios. I have two other business partners there, and this is not my first studio that I’m involved in, but it’s the latest one, the one that I’m now really developing. The studio was founded in 1979…even before I was born…[it] was actually a studio since the 60’s and used to be the old Studio Center here in Miami, Florida, before we were there, that did a lot of records with…Henry Stone, all the disco stuff, and at some point I guess Michael Jackson, Electric Light Orchestra, Bee Gees. So very lucky and fortunate to be able now to work in this facility and with this studio…We’re kind of in the heart of the Miami recording studio district…Jimmy Douglass with CBS Records, and a great legend, he’s down the street. DJ Khaled has a studio also a block away from the studio. Other places, too. Another one I forgot before, Audio Vision which is down Dixie Highway, very close. So there’s always been that sense of the community and the music, the artistry, and it’s just a block away from each other…

This facility was always known for the drum sound in the live room that we have, and we’ve always kind of kept that. So even if there are people working in other studios, they always wanted to come in and work in our live room in Studio A…Sometimes I listen to stuff on the radio and I tell [my wife]—I get goosebumps because I know the room—”I’m sure that was recorded in our live room.” She’s like, “Oh no way. There’s no way that you can tell that,” and then you go to AllMusic, and yeah, most of the times sure enough, at some point the drums or something was done in the live room. You can hear that sonic fingerprint of the room.

RRFC: So let’s talk about the students you work with. What qualities do you look for and what do you want to know about them before you take them on as an extern?

Pablo: I would say, first of all, I want to know how excited and how motivated they are to be involved in the career…then the other side of it is how excited or how willing they are to get into the fundamental stuff. I mean really it just depends on which program they’re in. But for the engineering program, it has to be more than just Pro Tools. It’s really understanding the microphones, really understanding the process, the preamps, the placement in the room, fades, so many things. I think that in my experience, I mean there have only been maybe two people that I’ve interviewed that I didn’t think were really going to be good candidates. But other than that, for the most part the people that have come through have that excitement, that expectation, and that willingness for hard work, which is important. I think that’s vital to be able to succeed in this industry.

RRFC: What is it that you like about teaching, particularly with the Recording Connection?

Pablo: I always hear people complaining about how things are nowadays and about what the new generation doesn’t know and that they don’t do this or that. So to me, it’s “Okay, so what do you do about it?” Well, I go in and teach them… “If you are responsible and mature enough to say, “You know what…I’m willing to do this and I’m going to do it for real. I’m not just going to go on YouTube and just watch a couple of videos and buy an interface and say I am an engineer,” then I respect that, and I’m willing to give you my time and to really teach you if you’re really going to pull your part…If you want to get real about this, if you really want to learn this and you want to study it, then let’s talk about it, let’s do it…

With the Recording Connection, I really like the fact that kids get that opportunity to have a one-on-one and to be a part of a studio, see how that works, and just start getting involved. I think that’s a huge advantage versus, you know, a more traditional thing like Berklee or just a regular college…But it’s also good for people that are maybe dealing with other things, having to have a day job and deal with financial circumstances or maybe a kid or family member or something they have to take care of. This gives them that opportunity…This is actually more custom-tailored and more one-on-one.

RRFC: Any final advice to students going through the program? How do you think they can make the most of it?

Pablo: I would say to really take the time that they’re involved here, and to really take advantage of it and really devote themselves…just to be around and to see what’s going on, really see the process outside of the one-on-one classes and stuff…be a part of the studio that you’re in, make yourself helpful. Usually the people that are around get to see what’s going on, get to meet people that are coming through and make contact or sometimes be involved in the projects and stuff when the producer has come back or the artist or whoever it might be…Just being in the studio is the opportunity.


Misha Kachkachishvili on what it takes to work with Solange, Common, Aloe Blacc, Janelle Monae, Eric Clapton and other Greats