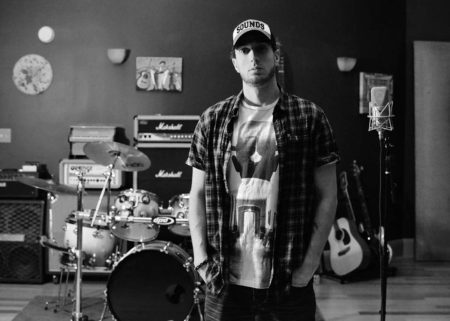 We’re always happy when Recording Connection mentor Sean Giovanni finds some time to talk with us! A music industry veteran in Nashville, not only has Sean worked with major players like Tim McGraw and John Legend, but he also hosts a local show called BalconyTV which features live performances from up-and-coming Nashville talent.

Sean recently had the opportunity to move his Nashville recording studio, The Record Shop, into a much larger, more versatile space. He was excited to talk with us about it and share the possible benefits to Recording Connection students, as well. During the conversation, he also shared some detailed tips on how he likes to mike live drums, which many of our audio students should find very helpful! Enjoy!

RRFC: So tell us what’s happening with your new space.

Sean Giovanni: Well, for about the last year to year and a half we have been looking for a new facility to expand our operation, and about two months ago we finally found a property that works for what we’re looking for. We moved in six weeks ago, and now we’re totally set up and ready to launch our new version of The Record Shop, and we’re excited to get the word out about it.

RRFC: What are some of the ways the new space meets your needs?

Sean: One of the things that we wanted was to be able to have a space where we can incorporate some of the multimedia work that we do in addition to the recording studio work. So our new space has an area that we can utilize for video editing, for filming and photoshoots as well as some of the graphic design and marketing work that we do.

RRFC: Very nice! Let’s talk a moment about one of your former students, Jones Nelson, who seems to be doing quite well since doing the program. He said he really learned a lot from you —because you guys kind of came at it differently—you really taught him a lot about MIDI and all that.

Sean: I think he was able to observe a fair amount of the MIDI programming, track making side of things, and how it relates to utilizing synthetic elements in modern music that still incorporates live instrumentation too. He got to experience how we fuse the two together so it has a modern sound but keeps the same feel of a band.

RRFC: So let’s say you’re incorporating beats into something that’s aiming to have a more organic feel. How do you balance it out? Is there a way that you approach that? 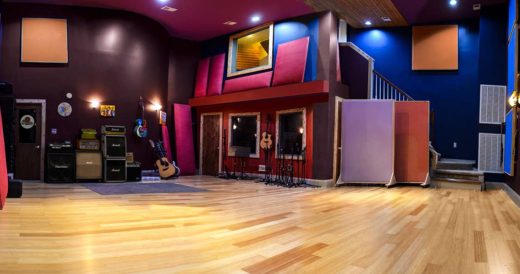 Live Room in The Record Shop

Sean: Usually I think it depends on the song and the artist. The first decision we make with an artist is how much of a blend we want on each of those elements. So if there’s a band that’s more live feel driven, we may support the programming minimalistically but that gives it the sonic foundation that we’re looking for, whereas another band may want to push the envelope and be more pop-driven and really incorporate those elements a little more aggressively. So I think it’s a determination of the sonic branding of the artists first and how they work together. I try to layer the elements in a unique way.

RRFC: When you’re just going with a straight up rock band, what are the instruments you feel are best to leave un-programmed so that you get that feel? Do you have a preference?

Sean: Any sort of live drum set I think should be played by a live drummer. It’s very common in modern rock music to edit the drums pretty significantly to get them really tight and solid, almost more machine sounding depending on the type of rock band. But I personally prefer to still use a live drum kit as opposed to sampling everything. There’s some really good software out there, but it just doesn’t have the same feel.  I like to leave the organic sounds for a real drum set and the sampled sounds for the drum machine.

Sean: I start my approach with the room mikes and overheads. As a producer and engineer, I like to hear the drum set as one complete instrument. So when I go into a studio, we bang out some drums and I get an idea of where in the room it sounds like the drums are resonating in the way that we want to hear them, and usually I’ll start by setting up a few different sets of room mikes. Some of them will be lower to the ground, some of them will be higher up, and some of them may be kind of mid-level…typically staggered in different distances away from the drum set. There may be times that I’ll find one spot in the room that maybe the snare really cuts through, and I’ll place a mike there and just find little pockets within the room where sonically everything kind of comes together and the whole kit sounds like one piece to my ears.

RRFC: So are you miking up any of the toms individually or anything like that?

Sean: Yeah, after I get the overall room sound and overhead sound which is where I start when I’m mixing. So it’s kind of where I start when I’m tracking as well. Then I would close-mike all of the individual drums. I usually use a mike on the inside of the kick drum and a mike on the outside…a mike on top of the snare drum and on top of all the toms. And I often take a unique approach on the mike that would go underneath the snare drum; I typically use a ribbon microphone that has a figure eight pattern, so it picks up from the front and the back of the microphone, and I place that down kind of by where the drummer’s knee would be, in between the kick drum and the snare drum. So one side of the microphone is pointed towards the head of the kick drum, and the other side of the microphone is pointed up toward the bottom of the snare drum. I find for me that’s a very effective way of being able to get a nice blend between the kick and snare and still get that sort of fizzle and ghost notes that happen with the mike underneath the snare drum, but with a fuller, fatter kind of sound. So I use that mike as the sort of glue that gets blended in.

RRFC: Okay, so when you’re trying to get that “fat” sound, what do you think will kill a fat sound more than anything when it comes to mixing? What are the no-no’s?

Sean Giovanni: Too much EQ and too much compression—just doing anything too aggressively. I think it’s common when you first start mixing to really try to carve out each individual sound as opposed to listening to how each sound relates to the other one. I know that I did that early on in my learning days of figuring out how to mix, I would listen to each individual thing and really try to get it to sound the best that it could on its own, and then once I put it back in to the mix it just lost all the life and power that it had. So I think learning the art of subtlety within mixing. 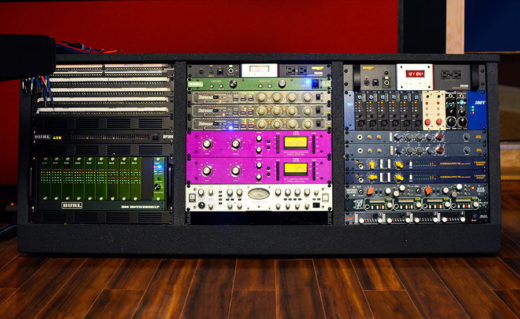 RRFC: Anything else you want to tell us about your new space?

Sean: One other thing that I think is pretty cool that I’m excited to share with our students is we’ve set up a secondary production room that during the time will be utilized for mixing, editing, and basic overdubs as well as vocal recording. So while I’m working on maybe one of our major projects in one room, we can be doing background vocals or overdubs or editing or programming in the other room. The B room is set up with an identical Pro Tools HD system and has the same plugins and software that I have on my main computer, which allows us to send sessions back and forth, and has access to the same incredible mike closet that we have at the studio. So any clients that come in and may just want to cut a vocal, they have access to all the same microphones that they would if they were booking our main room…But how I think that room will have the biggest effect on what we offer to the Recording Connection program is that our students will be able to have an identical system to the system that I work on to be able to practice on while we’re in sessions. So as opposed just coming in on their non-lesson days…they’ll be able to simultaneously work on the same session that I’m working on in the other room, and we’ll be able to review that and give them more direct, hands-on experience throughout the program.