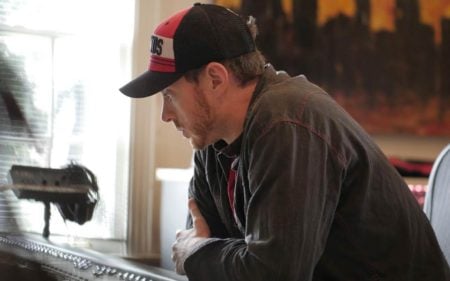 As owner and chief producer/engineer at The Record Shop in Nashville, TN, Sean Giovanni is a music industry professional who grew from humble beginnings to become an integral part of the Nashville music scene, with a diverse client list that includes names like Big & Rich, Tim McGraw, Brett Michaels and Lil Jon. As a Recording Connection mentor, he takes pride in helping our students find their own paths to success. In a recent conversation with RRFC, Sean shared a bit about his beginnings in the music business, his observations about the Nashville music scene, and some helpful advice on building relationships and working with artists. We’ve mined the best nuggets from that conversation for you below. Enjoy!

ON HOW HE DECIDED TO PURSUE A CAREER IN AUDIO ENGINEERING AND PRODUCING:

“I’ve just always been a huge fan of music…My dad was a huge fan of music, he always had music on when I was young and love taking me to concerts. Everybody from Alan Parsons to Snoop Dogg. Experiencing really made me want to do something with music. I started taking guitar lessons, playing around on piano, writing and learned basic music theory. And I think at some point…my mind was always thinking about like the arrangement, like all of the parts, and how they work together, and the dynamics between things… That was the part of music that became most inspiring to me.

“Around middle school I got into DJing…I bought a four-track tape recorder and started learning the ins and outs of engineering, just to record my own things and some songwriter friends. I started producing some pop tracks and hip hop tracks as well, and began to get an idea of how I was going to turn this passion that I had for music into a career. In high school I started getting really interested in the idea of being a producer and engineer and began to research how to get into the industry.”

ON SURVIVING IN NASHVILLE IN THE EARLY DAYS, AND MAKING CONNECTIONS:

“I ended up DJing at the club downtown. And so, doing that, I was able to pay my bills, just working on the weekends…And then the rest of the time I could spend focused on engineering. I started making more investments into recording equipment and stuff, and kind of building up my studio side of things…one day I was just looking through the paper and saw an ad for an audio engineer at a voiceover studio. I went over and interviewed and got the job. One of the advantages that I didn’t think of until it happened was being connected with all the vocal talent. They didn’t just do commercials and dialogue stuff—they did vocal demos, and they were background singers, and touring performers…So they would introduce me to different producers, different artists, other session players, other session singers, and that sort of thing. It also gave me access to a lot of really great demo vocalists that I could then hire for projects, and people that I may not have met as quickly or easily otherwise…It turned out to be something that led to a lot of really good connections and opportunities.”

ON PAYING DUES AND COMING UP THE LADDER AS A PRODUCER/ENGINEER:

“I started just going out on my own and meeting artists and songwriters that were also new to town that didn’t have connections yet with a studio or a producer or engineer. Initially, my thought was just to build a client base, but also just to get more experience as an engineer. So, I’d just go out to shows and find people that had similar creative interests, and just you know, work together. At first, I wasn’t paid to do anything, I just would collaborate with different writers, artists, and bands. And then eventually I was able to start turning that sort of thing into paid gigs. I set up a small overdub studio in the Music Row area of Nashville…I think from doing that, the process to get into producing happened a lot quicker because I was working with new artists that were young, and new artists that were new talent, didn’t have huge budgets. So by default, I started taking on the role of a producer because there wasn’t someone else to do that with the people I was working with. And eventually, some of those people that I worked with started getting publishing deals, and record deals, and I was able to come along for the ride and continue to be a part of those projects.

That’s the way that the music business works in general. You pay your dues and work your way up, and then eventually some of the acts that you’re working with start to break and their career starts to take off. And then, in turn, your career takes off because people know who you are now.”

HIS OBSERVATIONS ON THE NASHVILLE MUSIC SCENE:

“I think there’s definitely different sorts of groups in Nashville as far as the scene goes. There’s a really strong songwriting community. Obviously, that’s a lot of what Nashville was built off…so there’s that side of the world, where there’s people, either independent writers or writers with publishing deals that spend their days with three sessions back-to-back writing…There’s the established production community, where we’re in the studio working on records, stuff that’s to be released, commercially …And then there’s like the new developing acts, and that side of the scene, young up and coming people, people that are new talent that are just kind of figuring things out, and they’re playing in small clubs on songwriting nights and regional tours. There’s a really diverse scene in Nashville…It’s definitely a super eclectic community.

I think one of the coolest things about Nashville is that if you go out in certain parts of town, an established, iconic major label act is just as likely to be sitting at the bar next to you as the kid that just moved to town and just has his guitar in his apartment and stuff, and is just kind of getting started with things…And if somebody’s out for some event or appearance somewhere—and they’re walking down Broadway, and there’s a band playing up the street, and they feel like singing…you know, you’ll see Keith Urban jump up onstage and sing with the band for a couple songs or something. That sort of thing happens all the time.”

THOUGHTS ON ONE OF HIS ONGOING PROJECTS, BALCONY TV, A SERIES OF ROOFTOP SHOWS:

“That’s a cool thing that we do. It’s a fun way for us to give back to the music community and to showcase the diversity of the musicians that we have in Nashville. With the way we try and book the shows, we’ll get an eclectic group of artists that normally would never play on the same bill together, but on Balcony TV, they can all come and meet and hang and share their different styles of music… It’s filmed once a month. We have a mobile recording rig that we bring out…all the converters and everything and preamps are all self-contained in the rack. Then we plug the laptop into it and got one power cable and everything just runs off of that.”

ADVICE ON BEING A “FORWARD THINKER” AND DEVELOPING AUTHENTIC INDUSTRY RELATIONSHIPS:

“You definitely have to keep an open mind and like a forward-thinking sort of mind. I’m kind of always thinking about opportunities, and something that I learned later on in my career is that the more value that you can add to the situation… For the voice talent that I was working with, if there’s something significant that you can offer to them, then they’re going to remember you more likely than just the random engineer that’s just pressing record… And if I could get ’em a gig you know, recording a demo vocal for me, that meant that I could get them over to my studio and I could let them see the real side of what I wanted to do and get them excited about that. And then, in turn, they would have, ‘Oh, well I’ve got this producer that I’ve been working with, that might need an assistant, and you know, it’d be good for you to meet them.’ Or, ‘I have a project that I’m working on that I need to do some overdubs for’ would you record them with me?’ …So, a lot of those, sort of, just thinking outside of the box and thinking about how you can maintain and develop a relationship further… I think that in the entertainment industry, in general, the more authentic that you are with people, the more you’re going to be respected.”

ADVICE ON THE GIVE-AND-TAKE ASPECT OF PRODUCING AN ARTIST:

So, when you’re a producer, you have to be like a psychologist, too, and understand how to deal with the way that somebody’s thinking and how they’re going to react to something that’s different than what they have. There’s some artists that are really open to things, and really trusting in that sort of way. And if you’ve already spent the time building up that respect between one another, then you’re much more likely to get a positive response from the artist if you have an idea that may be different than what their initial idea is, at least for them to be open to experimenting with it. But if the whole time through the process you’ve been saying, ‘No, we need to do this,’ every time they’re saying they want to do something the other way, then you’re just going to get more push back, you know, every time. So, I think the better trust that you’ve built with the artist, the easier it’s going to be to deal with that sort of situation…At the end of the day, they’re the ones that have to go out and perform the song every night. It’s going to be on their record, and both of your names are going to be on it, but you know, it’s representative of the artist. And as long as it’s not something that’s going to destroy my reputation or something, then you know, at that point, I think you just defer to what their decision is…I think the biggest thing to take away from it is that [you] don’t demand that something be a [certain] way, don’t say that you’re right and they’re wrong, but have a democratic discussion considering all of the options and make an educated decision based off of that. And the more open that you can be to that sort of experimentation of creativity, the more likely it is that they’re going to end up realizing that you may have had it right in the first place.”