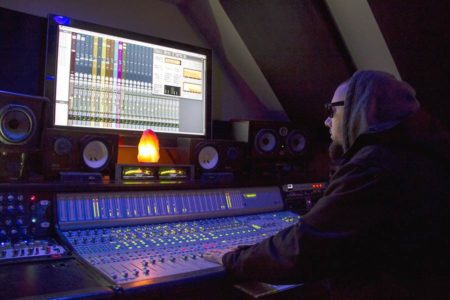 RRFC: So can you tell us the story of how you got into recording?

Andrew Clifford: Well, my father’s a jazz guitarist, so I was always either at shows or at his lessons, or recording sessions, or something. And so I was just always around music and grew up around music, and started playing drums at a young age…A friend of mine works out of New York, out of a few major studios there, and he liked the sound that I was getting when I was experimenting on just a little home setup that I had. And [he] brought me into a larger studio, and honestly I didn’t really know what I was doing at that point…the engineers there, I explained to them that I wanted to kind of capture a sound, but I was just honest with them and didn’t know what I was doing. And so they took me under their wing, and I learned under some Grammy-Award winning engineers, and it was just an incredible experience, you know?

I kind of took a different route. I went to college for music education and performance in jazz studies and stuff. So I never really went to school for audio per se, but this is kind of like the other road, I guess you’d say for engineering, and it was a great experience.

RRFC: So the guys that you trained with, do you think that they took a shine to you because you were so honest about your lack of experience?

Andrew: Yes, absolutely…In the industry, sometimes it’s who you know, but I think it’s also no matter what connections you have, it’s also your attitude and your vibe in the studio. And I think coming in…just showing up and automatically being a producer without the knowledge that I should’ve had, had I had any other approach, it would’ve had a negative effect…I think they respected the fact that I just was blatantly honest about, you know, I needed to grow on the technical side of things. And that’s when they kind of took me under their wing…I knew I had the drive and I knew I would figure it out, I just needed the right people on my side to help me overcome the technical barrier.

RRFC: So, fast forward to now—you’re running your own studio. What drew you to become a Recording Connection mentor?

Andrew: I really dug the background of the whole Recording Connection’s mission statement and, you know, some of the people that you guys have been working with. And then of course, once we got into it with the class plans, I really dug how it was laid out. The chapters made sense to me. I feel like the students really gravitated towards—you’ve got the textbook side of things, but then being in the studio and applying some of those things they learn through our textbooks, you know, and seeing them done…Not only are they using it from a reading standpoint, but they’re in the field seeing it done, and then hearing the results. So it was nicely laid out.

RRFC: What are some of the projects you’re working on in the studio now?

RRFC: What is your take on the mentorship process? Why do you feel mentorship is important?

Andrew: I think I’m all about educational experience. Like from my experience being in New York, and having been given the chance under people that could’ve easily just said, “Get the hell out of my studio,” you know?—It’s kind of giving back in a sense, remembering how they treated me, and trying to give back a little bit as well, and keeping that in the back of my mind as we’re going through sessions, and classes, and stuff like that…trying to always keep in mind the little things that they might keep with them as they go into the studio, or build their own home studio, whatever they might do in the future.

RRFC: What qualities do you look for when you’re thinking of taking someone on as an extern?

Andrew: It’s really just about the personality, I think. If they’re willing to learn, that’s the first thing. Knowing when to kind of just observe is an important thing in the studio. You know, not necessarily shouting out or, you know, if the producer’s talking to somebody through a talkback mic, not to over-shine and talk when you’re not supposed to, that type of thing…I’ve never really had a bad student. It’s just how…I think it’s more about the instructor, how you approach teaching the particular [student] because everybody learns differently.

RRFC: When you’re working with an extern in the studio, what are some studio etiquette rules you want them to know?

Andrew: I think the biggest mistake—and this hasn’t happened much in the studio, but it’s happened a couple times is just—if you’re in a session, just knowing when to chime in and when not to, you know?…Be a fly on the wall…and write all your questions down. Like I have no problem, you know, answering the question after the session or maybe at the next one-on-one class, or something like that. Write the questions down: Why did I use that mic? Why did I use this chain? Why was this effect on here? Why did this sound like this? Write everything in a notebook, and I think that’s the best approach. And the studio engineer, or producer, whoever you’re working with in the future after that session will appreciate the fact that you didn’t chime in right at that moment…It doesn’t happen all the time, but I would say that that’s probably one of the more frustrating things that could happen in the studio because it kind of stops the workflow for the client, you know?