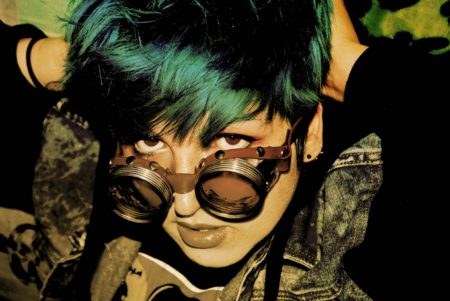 Lindsey Kappa has traveled a long road since she decided to pursue a music career. From writing and performing her own songs as a teenager at local events to a major cross-country move, Lindsey (whom we first featured last year) has remained steadfast in developing and expanding her audio engineering and production skills, all while growing as an artist.
Now Lindsey has come full circle with the realization of a dream—the release of her debut EP, World’s Collide. A truly DIY effort, Lindsey wrote, produced and recorded the songs herself, drawing in part upon the training and encouragement she received as a Recording Connection extern with Frenchie Smith at The Bubble in Austin, TX.

“The whole album was actually done in my bedroom,” she says. “Frenchie was the one who told me…I remember one day, he invited me to his house because he was recording vocals for somebody in his living room, and he told me, ‘You’re here so you can see that I can record at my house, too, and that anybody can honestly record in their house. They just have to kind of find a way to reconstruct the room you know with the tools and resources they have.’”

While nurturing dreams of becoming a recording artist as a teen, Lindsey decided to learn audio, not only so she could produce her own music but also hopefully to gain supplemental income helping other bands, as well. Perhaps a surprisingly level-headed decision for someone her age to make, Lindsey attributes it to her upbringing.

“My parents were very supportive, thank God,” she says. “They loved my passions, but they also wanted me to use my head. And you know, I think that’s kind of where it all kind of stemmed from, just having parents who kind of shake you and make you grounded. But then, when I was 15, my mom became a single parent, and I think that kind of put things in a different perspective for me because…I kind of had to grow up then. The things that you would usually do as a teenager, I couldn’t really do just because they were not responsible, and I didn’t want to put my mother through a freaking heart attack…I kind of had to think like an adult by that time. So because of that, I thought as an adult for my music as well.”

As for the do-it-yourself, take-charge mentality that prompted her to produce her own record, Lindsey credits her mother as a huge inspiration. “Her personality was, ‘If I can learn how to do it, I’m going to do it on my own,’” says Lindsey. “She couldn’t afford to hire people to do stuff for her like fixing…like even the simple stuff like fixing the oven…She would get books, or she would look on YouTube and like do all that kind of stuff and try to fix it herself to make it less costly. So I think that kind of transferred over to me to where I thought, ‘Hey, I can do this by myself you know learn and this could benefit me,’ considering the fact that in the music industry now you can’t just learn one thing, you know? You kind of have to have a couple of titles on your belt.”

Even though she’d earned an associate’s degree in audio from a school in Minnesota, Lindsey felt she needed more hands-on experience, which is why she chose the Recording Connection. Moving with her mother to Austin, the “Live Music Capital of the World,” seemed a great opportunity to get in the door of the industry by apprenticing with Frenchie Smith. She thrived in the studio environment and even earned some engineering and music credits while working with her mentor—but Lindsey never lost sight of her goal to be a recording artist in her own right. After completing the program, she felt it was time to focus her talents, energy, and knowledge on her own important project. The result is the World’s Collide EP, a combination of songs dating back to her teen years and one recently written in two days’ time. She says the idea for “Please Don’t Go Away” actually came to her while working a morning shift at Trader Joe’s.

“I just kind of started just thinking and humming to myself as I was, you know, doing my stuff,” she says. “All of a sudden, I came up with like a possible chorus, so I whipped out my phone and I kind of sang it in the phone and saved it for later. And then once I got home, I started writing it.”

Another interesting turn in the road for Lindsey is in the fact that her music has shifted from an early acoustic vibe to a more pronounced electronic feel—something that parallels her own shift from analog to digital in the audio world.

“I wanted to be fully tape machine,” she explains. You know, I wanted to be organic…I just thought that was the way to go. I performed around the Minneapolis area with like acoustic guitar, you know, just pretty raw…I had classes on tape machines and all that kind of stuff, and I realized that especially in today’s world, it’s going to be really hard trying to get my career started within an analog setting because I don’t have the money for it, first of all. It takes a long time to collect all those pieces…it’s hard to come by that stuff and because it’s so hard to get your hands on…And when I was recording digitally, it was more possible for me, you know? I could just be in my bedroom and be able to get like tons of work done. So some convenience and financial considerations were definitely in the mix of my transition from analog to digital. But…I started to notice my taste in music change, where I was listening to more artists like Lights and all that kind of stuff, so that was also kind of an inspiration as well.”

These days, Lindsey is immersing herself in the Austin music scene, gearing up to record a number of bands. It’s a marathon, not a sprint, but she says she’s in it for the long haul. “It’s definitely not easy…I have had plenty of personal meltdowns in the process… [But] there’s no Plan B for me. I can’t picture myself doing anything else. And everything that I do is a way to get where I want to be.”