At the Recording Connection, we’re pleased to have hundreds of world-class producers and engineers mentoring our students across the country—and we’re even more pleased when we can celebrate their achievements with them. Recently, Recording Connection mentor Edwin Ramos of Bridgeport, CT landed his fourth Grammy nomination, for Best Latin Jazz Album, for his work on Entre Colegas, a solo album by Latin bassist Andy González! (Edwin has had three other nominations, as well as a Grammy win for Mary J. Blige’s “He Think I Don’t Know.”)

We caught up with Edwin recently to chat about his Grammy nomination, and along the way he also brought us up to date on his current projects and how his students are helping out in the studio. Enjoy! 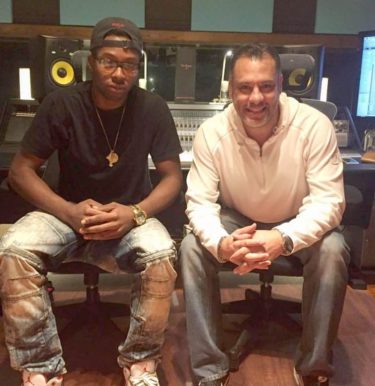 RRFC: Congratulations on your Grammy nomination! Tell us about the artist and the project.

Edwin Ramos: His name is Andy González. He’s a legendary bass player, very well known in the Latino field and Latin jazz genre mostly. But he’s played with the greats, and he’s a pretty awesome guy…I did all of the mixing and mastering.

RRFC: How did you get involved with the project?

Edwin: It was a project that was brought to me by some friends of mine that run a label here out of Connecticut…They approached me, you know, they asked me if I’d mind working with him as a mixer and recording services if needed. And I said, “Yeah, absolutely.” I took a listen to the project, and I absolutely loved it. And I knew it was an important project because Andy…he’s a legendary player, but he’s been playing for many, many years and has never recorded a solo album. So this is his chance to do that. I really had to jump at the opportunity to work with Andy on his first solo album. And I’m glad I did.

RRFC: Anything else you’ve been working on lately?

Edwin: I have a…you know, quite a few projects that I’m working on right now. You know, we just finished—not too long ago, I was out in Miami recording a 30-piece string section for Brian McKnight… I [also] have this small independent label that I’ve launched actually recently. And my first artist is a Latina singer out of here in Connecticut. She came in and recorded a couple of songs. We released one as the first single, and we’re looking to release more in the near future actually. But she’s already opening up shows with some pretty big Latin artists here in the Northeast area. So we’re really excited. Her single is doing very well.

RRFC: Great! What’s the artist’s name, and what made you want to work with her?

Edwin: Her name is Judy Gonzalez…She just has a captivating voice. I ran into her actually through my studio manager. My studio manager just kind of pulled me aside one day and said, “Edwin, you really have to listen to this girl that I ran into at this show, and she’s going to be performing tonight. You should come. She’s inviting you to come and take a listen.” So I went, and I just fell in love with the voice and her personality.

RRFC: So how are your students doing, and what are they up to?

Edwin: Well, I mean, all my students are great…A lot of my students end up coming back with their own projects and their own clients. I offer my studio to my graduating students, you know? And they use the studio quite a bit. We recently expanded to a bigger facility…We’re in Bridgeport now…My last two studios were about 750 square feet apiece. This one here is 6,500 square feet.

Edwin: So it’s a huge facility…Late this month, I have the New Haven symphony coming in. Yup, I have a whole symphony, and I can fit them into my live room. My live room can fit up to about a 125-piece symphony orchestra.

RRFC: Wow, wonderful. Will your students be involved?