Jam In The Van is a unique mobile recording studio that records both well-known and undiscovered acts live on-location at festivals and other events nationwide. As a partner with RRFC, Jam In The Van has been providing opportunities for RRFC students across the nation to work with the film and audio teams at many of their sessions! We recently caught up with Jack Higgins of JITV to get some backstory about this exciting project and learn more about how RRFC students and graduates are getting involved. 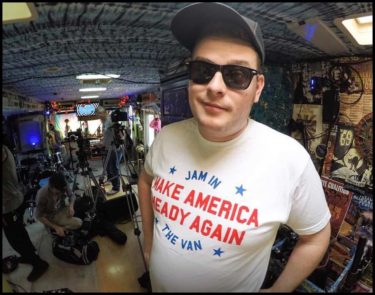 Jack Higgins of Jam In The Van (JITV)

RRFC: Can you tell us a little bit about what Jam In The Van is, and how it came to be?

Jack Higgins: So basically, Jam In The Van, we are a mobile solar panel recording studio/YouTube channel. We travel around the country going to different music festivals and events, different locations in different cities and making live music videos with bands performing inside of our van, which then we upload to YouTube. The van is solar powered: we have about four large panels on top of the van. And what’s great about that is we can kind of pull up anywhere. We could pull up on the side of the road, in the middle of the desert, and film really high-quality music videos as well as high-quality audio recordings without having to plug in. So we are totally mobile and can go just about anywhere and do our thing.

RRFC: Okay, so here’s the big question: Why? What was the impetus for this?

Jack: Our founders, Jake Cotler and David Bell, they used to go to Bonnaroo every year…They went to that festival for years and years and always had a really good time. And at the time…they were both working really boring office jobs…They rented an RV to take to the festival to kind of just camp in, and so they came up with the idea, by asking themselves, “How can we do this all the time?”…So they came up with the idea, they put a lot of money into it to get it started. And then for a long time, we were just filming sessions in Jake’s backyard in Venice, in a very old van. The first van was very, you know, kind of broken down, wouldn’t start a lot of the time, but we were able to go to a bunch of cool events like South by Southwest as well as Bonnaroo and mostly just filming around Los Angeles and in, you know, Venice in Jake’s backyard…Then other events like Bonnaroo we actually partnered with the festival, and they paid us to go and create content there. Now other events, different music festivals will reach out to us or we’ll reach out to different music festivals or different brands…Nowadays, our crew is much bigger, our operation is much more dialed-in. RRFC: How do you guys know where you are headed next? What takes you to a certain area?

Jack: So a lot of planning goes into it, but we’ll go all over the country for different events like for South by Southwest. We partner with GQ magazine, and we have an artist house there where over the course of the week we film about 40 bands and invite them to hang out at our kind of artist getaway. We had a big mansion on a lake with a swimming pool and boats and stuff like that so the bands could come and just kind of hang out. So, yeah, we do all sorts of events. There is a lot of different type of planning that goes into each one, and we have a lot of different companies and people that we are working with to make it happen.

RRFC: So who are some of the artists you’ve worked with on the van?

Jack: Some of the bigger names that have jammed in the van include Blues Traveler, Gary Clark Jr., Cody Simpson, The Black Lips, Wyclef Jean…Ziggy Marley, MisterWives, Elle King, who is actually very big right now…We release a new band Monday through Friday, five days a week. So we are always pushing out new content…We [also] tend to do a lot of undiscovered bands as well as a lot of big-name acts who kind of heard of what we do and want to be involved.

RRFC: Can you tell us about some of the RRFC students and graduates who have been working with you? How are they doing?

Jack: Yeah. So Anthony [Montejo] has been with us the longest. He actually has traveled with us. He joined us in Colorado—he got a full, all-expense-paid trip to join us at the GoPro Mountain Games in Vail, Colorado. And he’s been in the van helping Ethan, our sound engineer, set up microphones, run cords, mix the live sessions, set up the speakers and work with the bands to make sure that they’re set up and that they are liking their sound. Anthony’s been great. He came to all sorts of different events with us…And then as we traveled across the country, we went to North Carolina and Cleveland as well, and in each of those stops we had a Recording Connection student and a Film Connection student who helped us out…Sean Miller was really cool…Super engaged, super helpful, and we’re super excited to have him on board. And that’s what’s really cool. As you know, Recording Connection is this big national entity, and because we’re Jam in the Van, because we travel, it gives a bunch of different students the opportunity to experience what we do.

RRFC: What made you guys want to partner with us? Any thoughts about our programs thus far?

Jack: I think it’s awesome. I went to a typical four-year bachelor’s degree college…[and] I feel like I learned a lot more out in the field, working for Jam In The Van and working on a few different projects, you know, filming, editing, than I actually did during my entire four years at school. They taught you a lot of, you know, analytical, how to analyze movies that you watch, stuff like that, but not a lot of real-life experience. So leaving school is where I actually made most of my connections and skills. So when I heard about Recording Connection and Film Connection, I think that’s a great way to get your feet wet in the industry, save a lot of money, and you know, do what you really want to do.