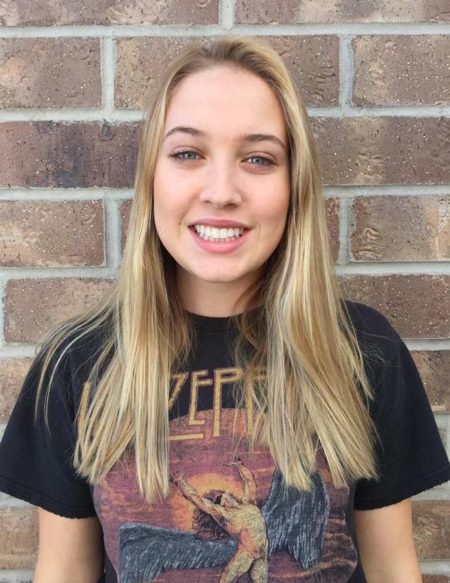 Recording Connection student Alysse LeFevre says she’s noticed an interesting dynamic being a female in the music industry, especially working on the engineering side of the glass.

“[My mentor] Larry is super supportive,” she says. “He’s very protective. He wants to make sure I’m always comfortable no matter what situation I’m in there at the studio…But definitely, you feel different when there’s 10 guys in the room, and you’re the short little girl in the corner that’s doing the dirty work. And they’re like ‘Who the heck is that girl? Like why is she here?’ So, yeah, there’s definitely a different dynamic when you’re female and working in the field. But if you’re good at what you do, and you’re sociable and you’re nice and you can get along with a lot of people, I think you can overcome that.”

Hailing from Los Angeles, California, Alysse’s interest in a music career blossomed early and stayed with her growing up.

“My parents signed me up for piano when I was 12,” she says. And I really didn’t want to do it, but I ended up liking it a lot, and I found that a lot of the people I admired were musicians. And so one day, it kind of clicked with me that I could be a musician.”

That desire led to an interest in learning audio engineering, as well. In fact, Alysse says she actually discovered the Recording Connection as a teenager and begged her mom for two years to let her enroll!

“My mom was pretty resistant to it when I was in high school,” she says. “But I was really persistent, so she finally let me pursue it.”

Alysse was placed as an audio engineering extern at The Lair, a noted L.A. recording studio with a client list that includes names like Katy Perry, One Direction and Ariana Grande. When she and her mom went in to interview and see the facility, she felt an immediate connection with her mentor, studio owner Larry Goetz.

“He showed me around the studio,” she says. “It was a really long conversation. He had us there for like an hour and a half or two hours. I mean, I was really impressed by him and the studio from the get-go, and I haven’t been disappointed since…Everybody there is very kind.”

Since starting at The Lair, Alysse has become immersed in the learning process and the happenings at the studio. A recent high point for her was assisting on a session with indie-rockers Portugal. The Man!

“They’re such a nice band,” she says, “…just really friendly guys. So I was just the assistant and I was micing up everything. And I think they had a set of like 15 mics that they didn’t know they were going to use…I had good conversations with them. They offered to buy me lunch. They’re really fun to work with.”

After waiting so long to enroll, is her Recording Connection externship all Alysse hoped it would be?

“I’m really satisfied,” she says. “I love the studio, and Larry’s probably the best mentor that I could have gotten…He’s seen a lot of changes that the industry’s gone through regarding engineering. When he’s teaching you…it’s a history lesson. He’ll tell you the history of everything. It just keeps it so interesting. And he always has really cool insights and suggestions. It’s not the same way reading from a book, because he’s actually done it.”

And what of her mother’s previous skepticism about the program?

“She loves it,” says Alysse. “She even comes in and listens in on the lessons, and she finds it really interesting when Larry teaches. And so that’s been a huge relief.”

“Definitely use the resources that the program provides,” says Alysse. “Tutoring is a huge deal. If you call your student adviser, they’ll definitely show you how things work on Pro Tools. That helps a lot.”

As far as her own future is concerned, Alysse has a goal to work full-time in the studio as an audio engineer. Even so, she sees it as a marathon, rather than a sprint. “It’s learning, so it takes time,” she says. “I think we expect to be professionals right away but it takes time, and we can’t get discouraged by that.”