Two Brothers Team Up to Launch their own Recording Studio 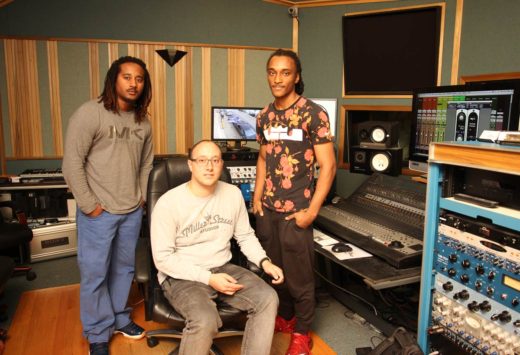 Some things run in the family. For brothers Dion and Devon Johnson of Chicago, IL, music had always been part of their lives.

“Probably my first time creating a rap I was probably like six, seven years old,” says Dion. “As I got older around like 12 or 13 I knew that’s what I wanted to do…I want to create music.”

Devon shared his brother’s musical passions but took a slightly different path. “I started playing the guitar when I was about 12 years old,” he says. “I went to Chicago High School for the Arts where I studied classical guitar.”

Coming of age presented a dilemma for both brothers when it came to taking their music to the next level. “I knew I wanted to pursue music,” says Devon. “I just didn’t know how to go about doing it. And I always knew that college probably wasn’t the right thing for me because I hated school and I didn’t want to be in debt with student loans at 17 years old, just starting out.”

Meanwhile, Dion says he got “distracted” with “adult” responsibilities that kept him out of music for a while. “I went off and tried to make money,” he says, “and tried other jobs and tried other careers, but it was just—I was miserable. So I decided to get back into music to do something that I love.”

Then Dion found an answer that both brothers could get excited about.

“One day Dion just called me out of the blue,” says Devon. “He said that he heard about this program called Recording Connection. And he was telling me about the different programs, audio engineering and producing, and as he was telling me this, I knew for a fact that I was going to do it. There was not a doubt in my mind.”

The brothers enrolled together and were placed as apprentices with mentor Joe Delfino at Miller Street Studios in Chicago. From the moment they walked into the studio for the first time, the brothers were hooked.

“I was excited,” says Devon, “because as soon as I walked into the control room, after seeing all the different things, I was eager to learn what everything was and how it worked and Joe came off as a really nice guy and it turned out to be true. He’s really a nice guy…I was definitely going to do it. I was definitely going to do it at Miller Street.”

Dion agrees. “Working with Joe has been really, really great because he is very patient…and any questions that we have to ask him or anything, whether it’s related to music or not, he gives us the best answers.”

Besides learning the gear and the ins and outs of recording and mixing, Devon says he’s been particularly impressed with the way his mentor works with clients. “Joe’s really patient with artists,” he says. “He never loses his cool…he’s always focused on the music and getting the artist what they want, no matter who comes in there. It’s the same for everyone…I learned a lot from watching him.”

As the pair finish up their apprenticeship, they’re finalizing plans to open their own studio. An endeavor in which each of them is going to play a particular role. “I’m more focused on the engineering part and the business part,” says Dion. “When I look at my brother Devon, I would say he’s really into creating beats and he’s also into the engineering, while me myself, I’m like more business…We currently have a space for our own studio. We’re working on it now…going to open up maybe November or December.”

For the moment, however, Dion and Devon are taking full advantage of apprenticing at Miller Street, picking up all that they can in preparation for their new career.

“I think the program is great,” says Dion. “I’m excited every day I go to class. And it’s guaranteed that I will learn something every time I go.”

Devon agrees. “It was one of the best decisions that I ever made in my life so far. It’s all been great.”
[break class=”no-mobile” side=”left”