A true music industry veteran with decades of experience, David Mikeal toured for years with several major label bands before becoming an in-demand producer and engineer. These days, David operates StudioLive USA in Orlando, Florida, a world-class facility offering professional recording, mixing and live mobile recording, both audio and video services. The centerpiece of his studio is a massive live room with a stage and professional lighting which is also used for both audio and video production. (When we caught up with David recently, he was in the process of developing and shooting a TV show showcasing local Orlando talent.)

As it turns out, David also loves to pass his knowledge on to fresh new talent, and is one of the Recording Connection’s staunchest advocates and mentors. He’s taught our students for nearly two decades, and he’s hired quite a few of them along the way. During our recent conversation, David gave us plenty of golden advice about the nature of the business, what students need to know (besides the gear), and what he’s looking for in his students. The best nuggets of that conversation (and there’s a lot of them) have been mined for you below. Enjoy!


ON HIS JOURNEY FROM MUSICIAN TO MUSIC PRODUCER: 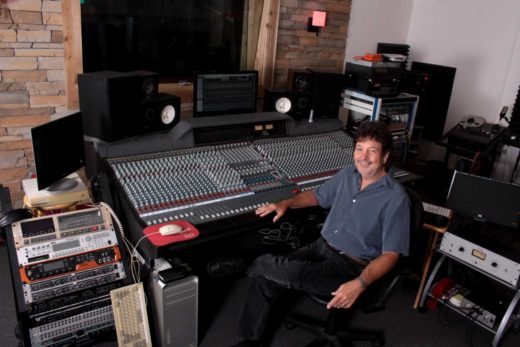 “All I ever wanted to be growing up was a musician, really. I play seven or eight instruments. I’m a singer/songwriter. I got lucky in my early 20s. I was with a band on A&M Records, and then I went on with another band on CBS Records…I spent a lot of my younger life playing in clubs, and then playing concerts with a couple major label bands and touring. And I started getting burned out on that because traveling’s really tough. And so maybe…I don’t know, after 10 or 15 years of a lot of that, I was like, ‘Gee, how can I stay in the music business but be home more often?’… I figured, ‘Well, the best way I can stay in the music business and be home is to get into studio work…’

“I had a little bit of experience recording, but not a whole lot. But I started out as a session guy, and then one thing led to another. I decided to get a bigger recorder and do stuff out of my bedroom. Then I started doing favors for friends…The next thing I knew I was charging them…I got more equipment and I moved out of the house, and got a little place. And it’s kind of progressed. Here I am, 25 years later, with a world-class studio and way too much equipment. But I still like to consider myself more of a musically-minded person rather than a tech head. We have all the modern equipment. We run Pro Tools, we run Logic, you name it, we’ve got it. But it’s still the music that keeps me interested.”

ON HOW THE RECORDING INDUSTRY IS ADAPTING TO THE RISE OF HOME RECORDING:

“People I know used to get offended in the old days, big studios, they would be offended if they couldn’t do the whole project from the ground-up, from the very beginning to the very end. [But] now, I advertise, ‘Look, if you recorded something at home and you want to take the last step for your project, and take it up a couple of notches, come to us. We’ll mix it for you.’ Or I have people hire me just to do guitar solos for them on the record, or I have people just come to the studio just for their drum tracks, and they do everything else at the house, because they can’t do drums at their places. They don’t have enough mics, or they can’t make that much noise. So I’m happy to do any and everything that anybody wants to do. I’m not offended, you know? And if you do a good job for them, and you treat them well, chances are they’re going to come back and want to do more with you…

“There’s a whole lot more to it than just having the equipment, you know, it’s the experience behind the equipment. It’s the ear, it’s everything. And I think some people that do a lot of home recording, they’re finally starting to understand that…Your average person can’t do in their bedroom what a real studio can do. And there’s no way it’s going to sound that good. It will sound okay, and some people can do it. But I think the word’s getting out that, ‘Hey, you know, maybe we need to go to a real studio to do this part.’”

ON WHY HE’S PUT SO MUCH EFFORT INTO HIS STUDIO’S LIVE ROOM: 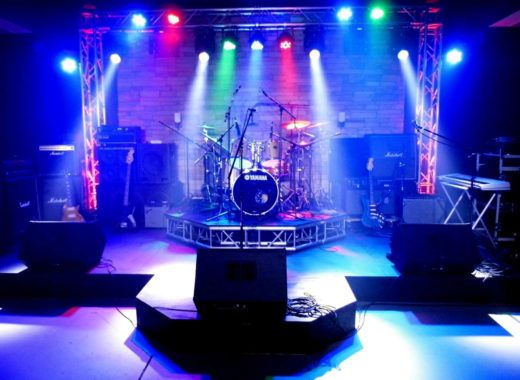 “Being a musician my whole life before I even got into engineering, I wanted to have a live room that was big enough where a small orchestra or a large band could all play together at the same time without being stuck in different iso-booths… We have a big live room with pretty high ceilings, it’s like 12-foot ceilings…a grand piano and a Hammond organ, and all sorts of vintage instruments, and guitar amps, and drums…Within the last two months, we built a stage in our live room. We built a new stage with a drum riser, and a full sound system, and new digital board. We have truss lighting with fog machines and spots, hence the name Studio Live USA.”

ON WHAT HE LOOKS FOR IN NEW EXTERNS, AND HOW HE APPROACHES THEM:

“I want to see them inquisitive, hungry to really want to learn, and I want to see that they are polite; that’s important to me… When I first interview them, I ask them, ‘How do you see yourself five years from now?’ A lot of them, they have no idea what they’re getting ready to learn…A lot of them tell me they want to learn how to record the right way so they can make their own stuff they do in their little studio at home sound better. So they’re taking the course specifically so they can learn the skills better, so they can work on their own stuff as musicians and singers…And I think after they learn what they learn, their goals may change because they actually realize that they could get a decent paying job, high-profile, in a real studio.”

THE TWO THINGS SUCCESSFUL ENGINEERS NEED (BESIDES KNOWING THE GEAR):

“There’s two skills that are going to get you just as far as knowing how to run all the equipment. Number one is you have to be a really good people person because you’re going to have to deal with some very difficult people, and you may have to spend 12 hours at a time with them in the control room, and you might not even like what they’re doing… The other thing is you’ve got to have a good set of ears…Having a good set of ears and knowing the right mixture for stuff, without being prompted too much, I think, is a gift. Some people have that, and some people don’t. And the people who do have it will go on to be basically mix engineers and mastering engineers. Some of the people who are very technically adept and can run the equipment, but don’t have the greatest gifted set of ears, they’ll probably be great tracking engineers, but they might not be called upon to mix a whole bunch of stuff, because that’s where the ear skills really come in… If you come to me [as a student], not only are we going to learn everything in the book, and the technical side, I’m also going to teach you how to listen as much as I’m going to teach you how to turn knobs.”

SHOUT OUT TO SOME OF THE STUDENTS THAT WENT ON TO WORK FOR HIM:

“Gavin Thomas—He was one of my students about four years ago…he’s my right-hand guy.

Another one was James Woodrich, and then another one recently at Studio Live…well, it was probably a year ago, was Sebastian Morales. Now he’s in Miami working with—I know he had done a session with Carlos Santana and some other people…Somebody else, come to think of it, helped me engineer a lot of stuff since he graduated, and he went through the Master’s. That’s Jason Powers…He actually works for me part time.”

ON WHAT HE LOVES ABOUT MENTORING STUDENTS:

“Well, for the most part, they keep me young. And it does help keep me fresh…Occasionally, I do get lucky and have people that, after they graduate, come back and actually work for me, at least for a while. And I think it’s natural for me to be a teacher. I teach guitar and piano. I really get a kick out of seeing the light go on in somebody’s eyes, when they get it…I tell the students when they get a bad grade on of the quizzes, I’m like, ‘You know, you need to study harder, and I’d be real proud of you if you get more of the answers right. But what’s most important to me is not how many questions you get right, or how many missed. It’s more important that you get it. And when I see that you get it and you retain it, that’s what I’m most appreciative of.’”

ON THE EFFECTIVENESS OF THE RECORDING CONNECTION’S HANDS-ON APPROACH:

“I think the Recording Connection course is wonderful… I can’t tell you how many students come to my studio that were interested in going to Full Sail first, or have actually bailed ship and decided to take this course, or come over here as musicians with a local band or something, or as their part-time engineer, only to tell me how they wish they wouldn’t have spent so much money, and they were stuck in a classroom of 30 or 40.”

A FINAL BIT OF ADVICE:

“One of my favorite sayings [is], ‘The best way to predict the future is to create it.’…You’ve just got to go get it. You’ve got to believe that you can do it. I tell people, ‘The only reason to get in the music business is because you love music.’ If you’re doing it for the money, it’s probably a mistake. But, you know, that could work for anything, because if you’re lucky enough to be able to do what you love, or at least be pursuing what you love, taking education in it, then the money will absolutely follow because if you’re doing what you love, you’re passionate about it.”