THE RRFC INTERVIEW: Mark Christensen of Engine Room Audio on Making the Most of Opportunity & Being Prepared

Saying Recording Connection mentor Mark Christensen is a music industry veteran would be an understatement. From playing in successful bands and sharing the stage with major artists in the 90s, Mark always nurtured a love for the production side and eventually set up his own recording company, Engine Room Audio, in the heart of Manhattan. Today, Engine Room occupies the entire 22nd floor of a building in Manhattan’s prestigious financial district, recording and mastering projects for major pop and urban artists. A multi-Grammy winning engineer himself, Mark works with such clients as Dr. Dre, 50 Cent, The Killers and OK Go, and recently mastered Fergie’s hot new single “M.I.L.F.$.”

RRFC writer Jeff McQ recently had the opportunity to visit Engine Room Audio in New York and interview Mark in person. Mark naturally had many great insights to share about what he looks for in a student and how they can make the most of the program, as well as how students can best prepare for an industry career. Enjoy! 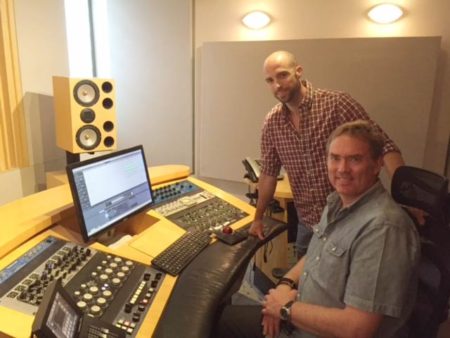 RRFC: So I’m curious to know your back story—you how you got into this industry and got to where you are.

Mark Christensen: From a very young age, 13 or something, I was always in bands. I grew up in Boulder, Colorado…I think I was probably the first person in Colorado to buy a cassette 4-track when those came out. I was really into recording from a very early age. I actually thought that I invented the patch bay. I had this idea of like, “If I had this little, I can plug the pieces of gear into each other,” and actually built one. And then I didn’t realize until later, “Oh, this is something that somebody else had already thought of.” So in my basement, I was having a little recording setup. I was just really into that.

I was in a band in New York that was signed, and we toured opening for Radiohead way back in the mid ’90s…But during the course of that, because I always had studios, I had built a really good studio in my loft apartment here in Manhattan…So this company, believe it or not, started in my apartment, and one of our services was doing these super high quality cassettes. We got a reputation really quick and a lot of labels were using us to make their promotional copies…I built a little mastering lab next to my little recording rig in my loft apartment because I had so many clients that we were doing cassette copies for, and they wanted me to make their stuff “sound better.”…So I started to do mastering in that little environment…I got a little tired of the band thing…and decided that being on sort of the more production side of things was more what I was interested in. And that’s when we moved the business out of my apartment and we built our first kind of real facility.”

RRFC: So what made you want to be a mentor? Mark: Someone from the Recording Connection…asked me if I would be interested in this kind of program…I like teaching, and the idea of having students who were in the studio environment and working with us here seemed like a good idea. So I tried it with a few students, and I was really happy with the results. I felt like they learn an awful lot being in a real studio environment. It’s a much more kind of concrete, hands-on sort of experience than trying to learn audio engineering from a textbook. So it’s become actually kind of a big part of what we do here. I teach every day, I have a couple of students that I teach. And so we have a number of students here all the time.

Mark: As you’ve seen, it’s a pretty big facility, 11,000 square feet here, and there’s lot of studios here. And we do a huge variety of things. We do mastering for a lot of big, popular, urban pop artists, but we also produce 15 different podcasts here, we do jazz records, we do recordings for a lot of the television networks. One of the things that students get is exposure to a huge variety of things. During the duration of their course, they’re going to end up seeing many different kinds of music recorded. And also we’re a facility that has that has an A-list mastering lab, as well as an A-list tracking room, and that also gives them the opportunity to get a look at all those various parts of the recording process.

RRFC: So when a student comes in to interview with you, what’s that spark you’re looking for that tells you, “This is somebody I can teach?”

Mark: One of the things I look for, is to make sure that they sort of have this in their blood, so to speak. So that’s one thing. The other thing, too, though, is the ability to kind of behave in a mature way…I look for people that can behave in the session as though they are already part of the production team. We’re looking for people that can behave like assistants. They have to be professional enough to not act like fans if their favorite artist walks through the front door, they can’t be asking for autographs, they can’t be asking for pictures. They have to just basically behave as though they are a part of the production team, which is what they are…What it comes down to is, “Can you be here and behave as though you’re part of the production environment?”

RRFC: Have there been students that you’ve hired or that you’ve recommended because of their skills? What do you do for some of your better students to help them find their place once they’re done?

Mark: I’ve actually hired a couple of Recording Connection students. There was a guy that was our operations manager here up until a year ago, who was one of my first Recording Connection students ever. He went through the whole program, did very, very well, did some engineering here as a freelance engineer, but then ultimately ended up becoming a full time employee as the operations manager. So yeah, we’re constantly on the lookout for good people…We definitely have referred people to other employment opportunities. There was a Recording Connection student that ended up becoming a full-time assistant to a famous DJ who will remain nameless…This DJ guy is a friend of our office manager, studio manager, and called asking if we had anybody who was qualified…so we were able to recommend this person.

RRFC: I talked with one of your current Recording Connection students, Darren Fewins. How is he doing, and what is he doing that impresses you?

Mark: He’s doing really well…In this business, you’re going to get out what you put in, and he is one of those guys who comes to every session we offer him…It’s normally two days a week when you are here, scheduled stuff, in terms of your lesson and your observation day. But we send out emails to all our students about the additional attendance or the sessions that are happening that are not necessarily on their calendar, that they’re still allowed to come to, and he comes to all of them. He’s very pro-active….I find that the people who put the energy in to it are the ones who tend get the most out of it, too.

RRFC: What do you think is the most important thing a student needs to know in order to break into the industry?

Mark: I think what it comes down to is, you make your own luck. You want to make sure that you are as prepared as you can possibly be for when that moment happens. You need to be sort of present and aware in all of your communications with all of the music industry people that you come into contact with. And you need to be ready for when that moment calls…You know that story of how Jimmy Iovine was an intern and ended up mixing part of John Lennon album. Those stories are actually real; that stuff actually happens. The best thing you can do for yourself is just to make sure that you’re very prepared and have your technical skills together so that when those moments arise, you can really show that you can shine.