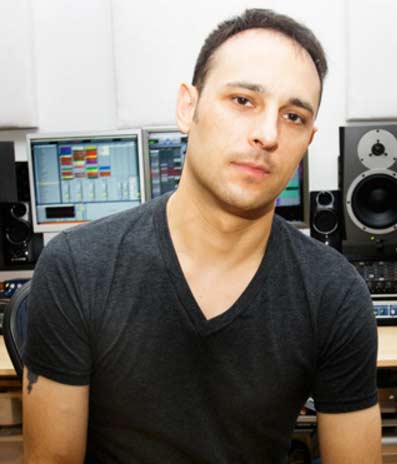 RRFC: So you helped write the Ableton curriculum for Recording Connection. Can you tell us a bit about that?

Brian Jackson: Yes, and in fact I designed it…I ended up designing all six of the modules, six lesson modules plus a six-lesson intro course, and I had my friend Jon Margulies, who is a well-known Ableton expert [who] wrote the Live Power books, I actually had him build out the intro course lessons. And then my good friend Tony Grund, who’s also another Ableton expert, assisted me with a few of the lessons in the bigger course.

RRFC: So your emphasis as a music producer is on electronic music. Are there any particular sub genres that you’re more interested in than in the others?

Brian: Yes, there’s a bunch of them. Being from Detroit originally, I definitely am interested in a lot of the Midwest stuff—so, obviously Detroit techno, aspects of Chicago house, Chicago industrial, so that’s a lot of the old school stuff, electro. But then all the modern versions of those things, synthpop, IDM, electro house, generally dub and anything dub influenced, down tempo. A lot of British music is really influential to me in general. So mainly anything that’s not super mainstream. I work with people that do mainstream stuff, but my own music tends to be some combination of those kind of classic underground styles, kind of put together in novel ways.

RRFC: What do you feel differentiates electronic music as far as the needs for learning audio engineering and music production as opposed to other styles of music? Can you elaborate on what goes into your particular focus?

Brian: An electronic musician is primarily doing everything themselves from start to finish. So that would mean that not only would I have to know how to use the technology and the tools to write the music, but I would have to have a sense on how a composition goes together, how a project works from beginning to end, which is of course what a producer’s role is in general, whether they’re overseeing a band or an artist production or your own. It’s seeing something from beginning to end, understanding what the audience is, what the format is, which sounds are appropriate, what length is appropriate. And then depending on the inclination of the electronic music producer, how much of the audio engineering they want to do themselves…Most electronic musicians I know do everything themselves except the mastering when they can afford to use someone who just specializes in mastering.

Brian: Yes, and then depending on what the actual type of style of music it is, it’s more intense on different aspects of it. So let’s take the example of say classic Detroit techno: there, you do have to understand sound and some basic good audio engineering kind of skills, but that’s more about a vibe and an energy. It’s more simple in its approach to how many sounds and how many pieces of equipment are being used, and the emphasis on that is really more on groove and feel and vibe. Whereas, say, commercial EDM, mainstream EDM, is much more about high production quality and meeting very specific needs for a bigger market. So there would be different ways people would want to approach these things even though they’re using the same software and the same hardware in a lot of cases. And then people who are doing vocal oriented music would have to understand more about recording vocals, room acoustics if you’re going to be recording other musicians, mixing and matching live musicians with all the software and synths and drum machines. So some people do a lot of engineering upfront…You have to know all of it, but the intensity is different for different styles.

RRFC: Yeah, depending on what style you’re going to focus on.

Brian: Right. And then nowadays, most professionals need to be familiar with a lot of styles. So over time you should understand how to record guitar and bass direct or with a mic on a cabinet. You should understand electric drums versus acoustic drums, how microphones work, how rooms work, the importance of your speakers, the importance of placing your speakers right in your room, the treatment of the room, the limitations of mixing on headphones versus mixing on bad speakers even in a decent room. And the pros and cons to all the different situations that are more in the audio engineer’s territory that we have to learn. We don’t have to know how to run an SSL console, but we have to understand a lot of the same concepts that say an engineer in a bigger room would be working with every day.

RRFC: What made you want to be a mentor, and what benefit do you see in the in-studio learning experience?

Brian: Well I’ve taught at a lot of the audio technology schools in New York City…and even then I’ve lectured or done guest things at various schools here outside of the audio engineering trade schools. And I’ve also been doing a lot of consulting and private lessons for well over a decade now. I’ve really enjoyed the one-on-one part of the teaching, and a lot of times when you just do that independently, people come and go, and there isn’t really time to help someone develop. A lot of times maybe that’s what they want, but they’re not really committed to something long enough where you’d actually help them kind of see everything evolve from just learning a piece of software to understanding kind of what someone does on their day-to-day or week-to-week when they’re actually doing this for a living…So yeah, I like teaching, I like people that want to learn, and the mentor relationship is a really good way to see how those things can evolve in a very customized way.

RRFC: What do you look for when you’re interviewing a potential student? What is the spark or the type of criteria that you’re looking for that tells you, “This person is somebody I can pour knowledge into?”

Brian: Once you get past just the basic personality things to see if we just get along, the most important things for me hands down are passion and intellectual curiosity. People have different aptitudes, people have different skill levels, but it’s not always the most talented people or naturally talented people that do well. It’s people that are very passionate about it, and they want to learn. They’re not just interested in the results, they really want to know how to get there. So they’re not caught up in like, “Oh, I want to be a famous this or well-known remixer, or I want to be a big name DJ.” They’re focused on a goal, but they also really want to know the ins and outs of what it takes to do that on a number of levels. It’s intellectual curiosity and the right mindset, it’s passion, they really care about it. If you’re not passionate about this, do something else, because unless you’re one of the few people that blows up and does really well, it’s a hustle. So you’ve got do it because you love it, and the people that love it, you keep doing it…you do it because it’s something you’re really passionate about.

RRFC: Have you had any students who have stood out to you particularly?

Brian: Yeah, Richard Guerrero [is] just wrapping up…he did really well. He seemed to have a really good understanding on what he wanted to do, what the course was about, what he could get from me and he was great to have at my studio too. So yeah, I enjoyed having him as a student for sure…Most of the times he was here he was kind of shadowing me, watching me work, or he was working on his projects and his music over here, so I would be around to give him feedback…At the Audio Engineering Society convention here in New York last October, he helped me get a bunch of books there for the talk I gave at the Sound On Sound Project Studio Expo…So he got to walk around the trade show floor with me, talk to people from Sound On Sound Magazine, other producers and engineers I was friends with that we bumped into, so it was really… It’s only here every other year, so it was great timing for him to be one of my students so he could go to the trade show with me and get those kinds of connections.

RRFC: Being a specialist in your field, what advice can you give students who are particularly interested in electronic music production?

Brian: In this world, a lot of times you’re not looking for a specific job, because it’s not like you go through a recording program and you’re looking for a job at a studio as like starting as an assistant…There’s a lot of work opportunities that could lead to a job, maybe, but for the most part, you’re your own business. You have to think of it that way…In some cases it’s literally you’re your own business, whether you’re incorporated or have a DBA. And you have to figure out how to get your talent out there, your sounds out there, whether you want to collaborate with people, get your own music released, do sound stuff that would be picked up for video games, whatever the interest is. Some people want to stay in the club world when they’re younger, which is a good time to do that. Write tracks for clubs, be a DJ, try to do the jet-setting thing, see how that goes. A lot of the bigger DJs that are also producers are basically little industries. So over time they realize they that they don’t want just want to be a DJ, they don’t want to just produce tracks and remixes, they also have their own labels, their own booking agencies, their own clothing lines, their own clubs in some cases with some of the bigger name people. So yeah, you have to figure out what you want to do and do it. You have to be flexible, but you have to be focused…You have to think like an artist that’s also an entrepreneur.