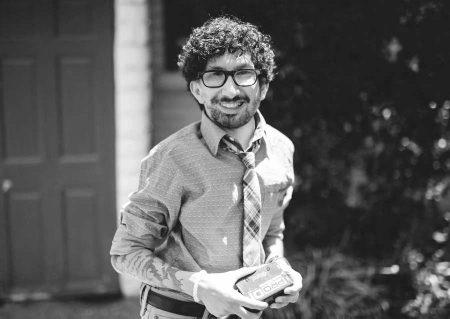 Recording Connection grad Sky Felix of Long Beach, CA stays pretty busy in the industry these days. As assistant to film and TV composer Michael Corcoran, Sky has worked on projects for Disney and VH1, with credits that include films like American Pie and New Year’s Eve, along with TV shows Shake It Up and Best Friends Whenever. In the process, he’s had the opportunity to fill a lot of roles, from music editing to composing quite a few music cues himself. For Sky, the whole experience has been a huge lesson in working under pressure and giving the client what they want.

“In this business, it’s a ‘yes’ business,” he says. “What they want, they get. And it doesn’t matter if you don’t think it’s a good idea. You let them find out it’s a bad idea…You have to figure out what they want and you’ve got to appease them, because it’s not like it can be done whenever. There’s a set schedule for when shows are being edited and when they go to air. You cannot put the show behind.”

As it turns out, Sky’s whole journey into a music industry career has been a progression of learning curves. He says that for him, it was never really about a burning desire to “make it big,” but rather a combination of natural talent, obsessive curiosity, and one thing leading to another. He started on cello as a kid in elementary school orchestra, and things progressed from there.

“There was a piano that was just hanging out in the cafeteria,” says Sky, “So every free period, or recess, or whatever, I’d just go by the piano and just doodle and just play whatever. Like, ‘Oh, that’s a Coldplay song. That, “Clocks,” song. I like that song. Let me figure out on piano.’…This one kid introduced me to this music program called Reason…I bought a copy, and I started messing around with it…So then it became composing these hip-hop beats, or whatever, for fun, because I didn’t know any better. So that blossomed into me understanding DAWs…

“So then, we took a vacation to Hawaii,” he continues, “and Dad, who’s got the CDs, he brought one CD, and it was the Jason Mraz’s Waiting for my Rocket to Come…It was a guitar-centric album, kind of folky guitar but I loved it. And that’s all we had to listen to. So by the end of the trip, like a five-day/seven-day trip, I was obsessed with the guitar. I knew my dad had a guitar that he never played. So I’m like, ‘I’m going to get that guitar and figure out these songs.’”

Even with his interest in music, Sky found himself drifting a bit after high school. “I was in college and I was like, ‘I don’t know what I want to do,’” he says. “I took some nonsense classes at college just to appease my parents. And then we stumbled across…I don’t even know where we found it. It might’ve been in a magazine, Mix magazine or something, we saw the Recording Connection advertisement. And my mom’s like, ‘Look at this.’ And I’m like, ‘Hey, that’ll be pretty cool. I’m pretty much making beats right now for no reason. I might as well learn what I’m doing because I don’t know what I’m doing.’”

Sky was placed as an apprentice with Donny Baker at ES Audio in Los Angeles, CA. It turned out to be the perfect breeding ground to give direction and focus to his musical interests.

“It revolves around what you want to get out of it,” Sky says about the program. “If you just want to mess around, then you’re not really going to learn anything. But if you want to learn, then you best stay…if you got a lesson at 11 A.M., you best stay there until 10 P.M., messing with whatever. Opening Pro Tools sessions, doing whatever, figuring out what does what.”

Sky’s obsession with “figuring out what does what” ended up paying off for him. “After I finished my course, I kept working there,” he says. “At some point I worked my way up to build Donny’s trust to where I was running sessions.” Every new project continued to stretch him, from helping out on sessions to actually recording and producing a full-length album for one of Donny’s clients. Then, one day, a fellow Recording Connection student sent Sky a Craigslist ad.

“It was basically a composer looking for a guy to help him out,” says Sky. “But the guy had to know Logic, or Ableton, or Pro Tools. Had to understand editing, and current pop music today. And I’m like, ‘That’s me. I get all those things.’”

The composer in question was film/TV composer Michael Corcoran. The two hit it off, and Mike hired Sky as his assistant. “From there, it just snowballed,” he says. “I was hanging out with him every day, just watching him make music. But then, one day, they were like, ‘Oh, Disney called because they need a music editor. We’re going to give you this gig.’ And I’m like, ‘All right. That’s cool.’ And I didn’t really know what music editing was!”

The learning curves just kept coming, and so did the opportunities. “I was put on this show that we just finished almost a year ago,” he says. “It was a brand new show, and my boss was already working on feature films and other things, and he didn’t have time to do it. So it was my gig. It went from me editing music to me, now, composing music for this show. So that was a big step up…We just did the pilot, but then it got picked up. So then I ended up doing 23 episodes of this show, where every week or so, I’d have to do 13-14 pieces of music for the TV show.”

Now several years into it, Sky is a music industry success by most people’s definitions. But from his perspective, he hasn’t “arrived.” He’s still paying dues and learning as he goes.

“You don’t get to the top quickly,” he says. “You’ve got to work on it. And I’m still working on it. I’ve gotten to where I’ve gotten by me wanting to get there…I don’t know where it’s going to take me but making music makes me happy. Working in the music field makes me happy. So as long as I live each day as it is and do the best that I can, then that’s good.”