Situated on 2300 acres amidst a series of pecan orchards just outside El Paso, Texas, the world-renowned Sonic Ranch prides itself as the largest recording studio in the world. Not only does the sprawling complex house multiple rooms for recording and mixing, but there is also housing on-site for recording artists to stay and create in a retreat-like setting, sometimes for months at a time. Noted producer/engineer and Recording Connection mentor Charles Godfrey has spent more than a decade recording here at Sonic Ranch, with album credits that include Mudvayne, Yeah Yeah Yeahs, Sublime with Rome, Beach House and Portugal. The Man, to name a few.

As it turns out, Charles’ own story of how he became a successful engineer is a great example of how up-and-comers break into the industry: a combination of being in the right place at the right time, and being able to prove your skills when that moment arrives. It started, Charles says, with getting hired at the local Guitar Center… 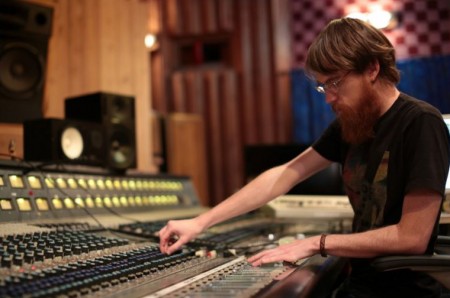 “I had my own recording studio,” he says, “and I basically was just starting to record bands here locally, and I got through about five or six projects just after high school. A Guitar Center was opening up over here, and at the time I was working in kitchens and doing just whatever I could to get by, and obviously just playing all the time and recording whoever I can in my spare time…I went and interviewed, and myself being a drummer, got hired into the drum department on the spot right there, actually.”

A few months later, Tony Rancich, the owner of Sonic Ranch, happened to walk into Guitar Center, and Charles struck up a conversation with him. It turned out Tony needed a new drum tech to tune drums in the studio, so Charles went out to the ranch after his shift. “I told him about how I had my studio and this is what I do,” says Charles, “and he’s like, ‘Well Charles Godfrey is a drum tech, he can already do this, and he’s into engineering.’ So it was just a shoo-in from that point.”

Understandably, Charles says because of the nature of the studio, he has to be pretty selective about who he takes on as an extern. “It’s really because the standards that we try to uphold here,” he says. “The people that we bring around our artists need to realize that this is the artist’s house, this is where they live for a certain duration of time. It’s very much getting into their personal lives, so I need to have people here who are sensitive to that.”

Even with the stringent standards, Charles is drawn to young people who are hungry to be successful in the industry. When Recording Connection student Mario Ramirez had his initial interview, Charles says the studio owner was reluctant at first. “Tony was kind of like, ‘I don’t know about it…But I felt a connection with him in some cool way,” he says.

Charles decided to take a chance on Mario. He had a five-week project going on in his own home studio, so he brought Mario into his home studio for the initial part of his training. “He was great,” says Charles. “I could tell he was hungry because the first week, he was there until the lights were turned off…He would get there bright and early in the morning asking me if I need anything, or if everything’s okay. He would know when not to talk, he would know when to talk, and then from there I was like, “Wow, it’s obvious at this point,’ because he was so good. And then from there, after that session, I brought him back to the Ranch for the last 15 weeks of his 20-week project, and it just worked so well, he just jumped right in.”

The risk paid off big time for Mario, who ultimately got hired as an assistant engineer at Sonic Ranch within a couple of weeks of graduating. Charles says he’s still doing great. “I can see him growing into being a producer and growing into whatever he sees fit,” he says.

Interestingly enough, Charles comes from a traditional education background. “I’m son to a teacher,” he says. She actually just retired from being a principal for years, and so I thoroughly believe in education and the process that comes with. My dad is also pursuing a doctorate at the age of 65 right now. So it’s always about learning.”

Needless to say, it means something that someone with Charles’ background chooses to educate Recording Connection students via the mentored externship approach. “The Recording Connection definitely has a formula for the future of education,” he says. “There’s a really foundation education that people get when they come here, and it’s a world class education too…I think it’s worth more than any school can give you. That’s why I really like the Recording Connection, because it gets people in the environment, one-on-one with somebody who is doing it, knows about it and is able to illustrate it in every form and every detail to that one person and their attention span, instead of going into the education [with] a lot of people in a classroom.

“Unfortunately, most of the world looks for that piece of paper, that diploma,” Charles continues. “But that’s what I love about the music industry is that it’s not about that. It’s about the work you’ve done, the way you portray yourself.”

And that, he says, is one of the most important bits of advice he offers to up-and-comers in the industry. “The recommendation I would give to anybody in their first situation when it comes to their nerves or how they present themselves is you have to be yourself,” he says. “You have to be yourself, and that fits, or it doesn’t fit…The artist and the producer and engineer will know, because once again, we’re in the music industry…these people who are successful in the music industry are able to look deep inside their own hearts and expose things, and other people’s hearts and recognize and regard those things, since it is an artistic industry. You know, that’s just the nature of it. So if you’re not yourself, quite frankly, people are going to see right through it.”