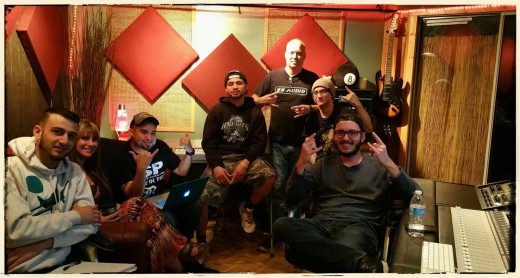 From a certain point of view, Recording Connection mentor Donny Baker is the least likely person you might expect to be a successful music industry pro. For one thing, coming from a family of commercial fisherman in southern Louisiana, he had no prior connection to the industry (“I’m the only one in my family who does this,” he quips). For another—Donny doesn’t play an instrument, and instead works strictly behind the board as an engineer. But he sees this as a plus, not a minus.

That frame of mind has obviously served Donny well, as his long career has included working behind the board (both in the studio and on tour) with such names as Madonna, Chick Corea, Aerosmith, Herbie Hancock, Brandy, Anne Hathaway and others. Beginning his career focus as a touring engineer, Donny eventually settled into studio work, and now is the primary engineer at ES Audio in Glendale, California.

“The students with Recording Connection are always…they’re always eager,” he says. “That’s why they’re there. That’s why they’ve reached out to find this program. I wish I’d known of this program when I was back in school. When I went back to school for my master’s degree, I wish I’d foreseen that program, because I came out of school and I still had to go figure out how to go work in a studio.”

The approach seems to be working, and many of Donny’s students not only go on to successful careers, but maintain relationship with him long after they graduate. “My very first student still calls me,” he says. “We still hang out. He still comes here and does work.”

And as for their successes? Take your pick. Taylor Crommie, one of Donny’s former students, has been working on projects ranging from major K-Pop artists to smartphone apps. Another, Uriel Soto, works with Donny at ES Audio full-time. Skyler Felix went on to work with Disney and VH1, and his credits include a top-10 record on the UK dance charts.

“There was another guy that worked here who now works at another studio,” says Donny, “who started working with Trinidad here and then Trinidad decided he wanted to work with somebody else…I brought Morning in, and then he and Morning just hit it off. And now any time Trinidad goes anywhere, he brings Morning with him…He’s here at least twice a week…he’s his engineer…It’s just that kind of relationship that Morning has built with his clients, as being an awesome engineer.”

Donny has another interesting perspective when it comes to mentoring students for music industry careers, and that is the way he opens doors for females trying to get into the business. Going against the common belief, he believes in many ways girls are even better engineers than many of the guys.

“They just seem to focus more and seem to be a little more intuitive as to how things get done,” he says. “I think it’s the guys in the band [who] don’t really pay attention to the girl engineers because of the whole stigma of dudes do this better. But I disagree… Sylvia Massy is one of my favorite engineers, and she’s amazing. Rose Mann-Cherney. She ran the Record Plant…one of the most famous studios in Los Angeles. This studio, our studio that we work in here, is owned by a female. It’s wonderful to see that.”

Donny acts on his convictions as well, accepting many female audio students right along with the guys.

“Dawnette Scolari..she’s doing well. She’s dedicated,” he says. “There’s another female…Carly Wasserman. She’s actually just about completed–I think she’s gonna be doing her advanced program in the live department. Then there’s another girl, Alexis Kirkbride. She’s kind of new into the program. She’s not even halfway done yet, but she’s dedicated.”

While Donny is passionate about helping new engineers launch their careers, he also looks for particular qualities in his students that he knows will help them succeed: namely, drive and work ethic. His advice to students?

“This game is a hustle,” Donny continues. “You got to get out there and just work. The more you work, the more you get…Even when times get tough, you just got to keep hustling. You got to stay on top of it, because if you take a day off, somebody’s going to come over and take your place…We work every day, all day. It’s not uncommon for me to be here 16, 18 hours a day every day…You can’t just come here once a week and take your quiz and go home and think that you’re going to become an engineer when you get your certificate. It’s not going to happen. It’s a matter of being in it and being on it all the time, every day.”