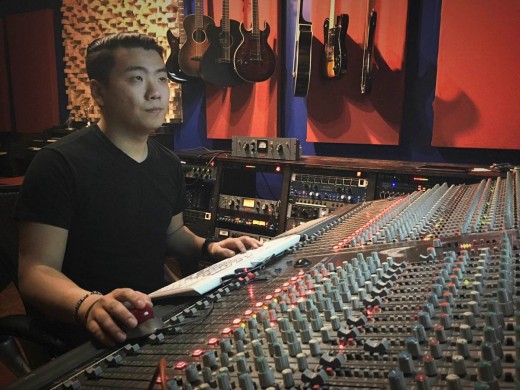 When it comes to his opinion on classroom education, Recording Connection graduate Paul Raymond pulls no punches.

“I hated school,” he admits. “I went to first grade at a public school, and then I was home schooled for the rest of the time because I hated public school. I hated the fact that my teacher had to teach 20 kids because I didn’t learn anything. I already knew what they were learning, so I wasn’t learning anything new.”

Meanwhile, growing up homeschooled, Paul began playing guitar and drums, developed a love for metal, and started teaching himself about recording. When he decided to pursue it professionally as a career, he says he seriously considered going to college but he was obviously reluctant.

“I was heavily looking into Full Sail,” he says, “and I was honestly about to call them up and find out how much everything was going to be. And I knew it was going to be crazy expensive.”

But then a friend told him about the Recording Connection.

“My friend Chad, who did the program as well, he said, ‘Hey, I heard you were going into recording…well, check this program out.’ He referred me to the recording school, and I was like, ‘Holy cow, how did I not find this?’”

It turned out that the Recording Connection wasn’t just a better price, but the learning approach was much more suited to a guy who hated school.

“[Being homeschooled] was a lot better because my mom sat down and she helped me,” says Paul. “For math, my dad sat down and one-on-one helped me. That’s sort of the way I’ve done everything…I’m a very hands-on learner, and I tune out sometimes if I’m having trouble learning, which is…when I’m not hands on, I have trouble learning, which means I sort of tune out and get frustrated or whatever. But when I read that this was mentor-mentee, I was like, ‘Oh! This is gonna be cool, ‘cause this is exactly what I need: hands-on. I get to sit there and watch and ask questions.’”

Paul was placed as an extern (mentee) at Metro 37 Recording Studios, one of the largest studios in Detroit, MI (and one that specializes in rock and metal). He was paired for mentoring with producer/engineer Kevin Sharpe (Shinedown, Fall Out Boy) and as is sometimes the case in music, the unexpected happened, right on lesson one.

“He had me start unplugging his whole front studio,” he says. “He wanted the wires to run neater and everything to look better. It was kind of messy at the time, due to the previous engineer. So I unhooked everything, rolled up all the cables, set them on the side, and then he’s like, ‘Oh shoot! I gotta go get my kid!’ So then he left…From my previous knowledge, I was able to put together the rest of his studio for him. When he got back…he was impressed that I could put it all back together. And so right then, he realized I had background and that I could do a little bit more than probably most people that had come in.”

From that point on, Kevin adapted the training to Paul’s level of experience. “He taught me so much,” says Paul. “Over the course of my time there, he corrected my bad habits.” Meanwhile, Paul continued to treat his externship like he was auditioning for a job, showing up for sessions even when he didn’t have a lesson scheduled, helping out where he could, and even running to the store for clients.

Paul’s dedication has paid off big time. During his time at Metro, he says he’s been able to sit in and on sessions with bands like Madam X, Miss May I and Born of Osiris, and he’s even been able to help run sessions with Vixen and Terry Brown. Kevin has also helped Paul procure some additional live gigs, as well. But the biggest payoff happened shortly after Kevin let Paul run an acoustic session on his own…

“We went out to lunch,” Paul recalls. [Kevin] told me, ‘Yeah, dude, you did a great job with that last session, so you’ve got a future here if you keep up the hard work. You can keep working here and running sessions for me because they really liked what you did and had nothing but good things to say.’”

Now working regularly at Metro, Paul is ecstatic to be working with his mentor, doing what he loves for a living. “Working at Metro is like everything I could dream of,” he says. “I have all the respect in the world for Kevin, because he taught me everything I know.”

For the long term, Paul says he’s slowly working on building out his own studio in a storefront where his grandfather used to run a shoe store. But for now, he says he’s perfectly content to continue at his mentor’s studio. “I realize that I can’t work at Metro forever,” he says, “but I’m going to work there as long as I can.”