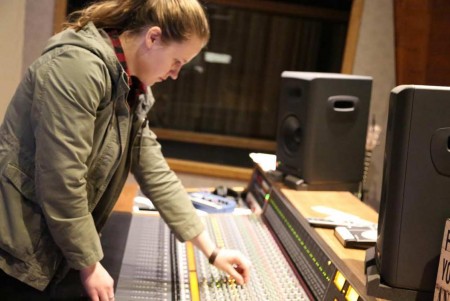 How does a small-town West Texas girl with no prior studio experience go from playing guitar in church to tracking sessions in a pro-level recording studio? For Recording Connection student Esther Friesen, it was an easier process than she could have imagined.

“I was looking for a place to expand my music,” Esther tells us, “so I went online…I came across your school and I got interested in it, and set me up with an interview right away.”

The externship interview was with Recording Connection mentor Anthony Nieto at MudRock Studio in Midland, TX. “I had actually never done anything in the studio before,” says Esther. “That was actually the first time I’d ever been inside a real studio.”

Anthony wasn’t put off by Esther’s lack of experience and helped put her at ease right away. “We met at the studio, and he give me the tour of the place,” she says. “We had about a two-hour interview, and he really explained in-depth what I was getting into.”

The one-on-one learning approach proved to be just what Esther needed to become comfortable in the studio setting. “Anthony took a lot of time to explain a lot of the stuff to me,” she says. “I could go to the studio and have my questions ready to where Anthony could just…sit down with me, and he would just answer the questions that I had…I’m more of a visual learner, and so I do better one-on-one than I would in campus-style.”

Esther says she also learned a lot about the studio etiquette side of things by watching Anthony work. “Being able to see him work with the artists, he really taught me a lot about artist relations, and I really enjoyed learning all that stuff, watching him work like that.” Before long, under Anthony’s watchful eye, Esther found herself assisting on recording sessions regularly, and she also found a new sense of passion working in the studio. “When we have sessions at the studio, Anthony lets me run Pro Tools, and he’ll run the board,” she says. “I really fell in love with audio engineering, like actually recording the audio. I really enjoy that now.”

As Esther finishes up her externship, she plans to continue working in the studio and honing her engineering skills, and thanks to the rapport she’s built with her mentor, she has the opportunity to do just that. “Anthony told me I could keep coming back,” she says, “so I’m doing that once a week now.”

For others who might consider getting audio training with the Recording Connection, Esther’s advice is pretty straightforward: “Go for it,” she says. “It’s a great program for the price…we learn a lot of stuff for it during these six months.”