Recording Connection grad Tim Schumann gets the keys to the studio! 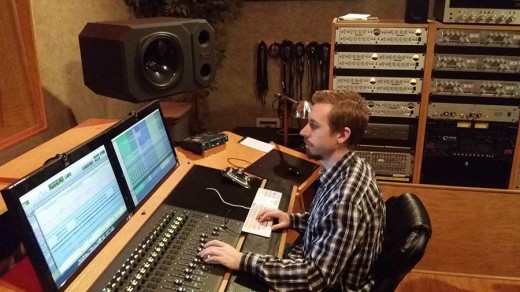 Recording Connection grad Tim Schumann recalls the time his mentor, music industry veteran Josquin des Pres, first handed him the keys to the recording studio—an instant he refers to as his “proudest moment”:

“Getting that recognition that I know what I’m doing,” he says, “and Josquin trusts me with keys and a security code and all this kind of stuff—that just shows me that I’ve made it so far. I think that was like a huge thing because after a couple years of Ableton, a couple years of DJing, a couple years of everything else and then doing Recording Connection. And then at the end, it’s like…there’s at least this job, and there’s this trust from a producer, from a well-known producer. That really has been one of the key moments for me.”

To hear him tell it, that moment almost didn’t happen. Although as an emerging electronic musician, Tim already had some experience with Ableton and had even done some DJing, when he enrolled in the Recording Connection and went for his initial interview at Track Star Studios in San Diego, California, he wasn’t sure Josquin was willing to take him on as an extern at first. “I don’t know if it’s because I was nervous or what,” he says. “But I think towards the end of the interview, as I kind of started letting more of my knowledge out because I’d already been working in Ableton for a couple years, just writing my own stuff…I think over the course of the interview, he kind of got a sense like, ‘Okay, I actually do know what I’m talking about.’”

In the end, Tim sold himself and got accepted. Right away, both in being a “fly on the wall” in sessions and in helping out in the studio, he was impressed by the caliber of talent in the studio, as well as the quality of sound Josquin is able to get.

“He’s been doing it for a long time and he’s just a professional in every sense of the word, you know,” he says. “And he allows us as engineers, he gives us control, he lets us take over things when he doesn’t need to be there. But he’s always there to approve the final project and final sound of everything.” 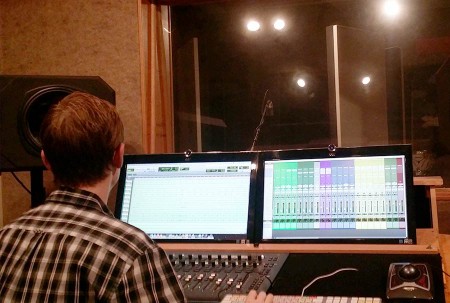 Working with Josquin, not only has Tim improved his skills, but he says he’s learned a lot about the business side, as well. “Clients come first,” he says. “You know, like I think that there’s a lot to say for going above and beyond what a client asks for, but at the same time, not underselling yourself…We are more expensive than the other studios in town, maybe, or some of the smaller studios. But at the end, we’re giving you a professional sound that’s going to sound better than everyone else, so we don’t undersell ourselves.”

Tim’s hard work as an extern paid off. Today, he’s got a job at Track Star as one of the engineers—and, of course, keys to the studio. “We’ve got a steady stream of clients in the area,” he says. “And Josquin does a really good job of finding people. Like, he’s working with people who are in town from Germany right now, who are basically over here to record with him and then they’re going back… I do some recruiting as well. I get to make a little more money when I find clients and bring them in.”

Now in the process of building his career, Tim says getting in the studio as a Recording Connection extern was the best decision he could have made. “I’ve never been good at school,” he says, “I don’t know if it’s just because of too much A.D.D. or what, but sitting in a classroom and trying to learn never really works for me. It’s always something where hands-on and doing it on my own pace really…I can excel doing it that way. So that aspect of the program really drew me in. And another thing was the actual mentor style approach, foot-in-the-door kind of approach…It was really nice to have this thing where I could get educated and have a foot in the door toward the working career all at the same time.”