At the Crossroads in Nashville: Recording student Chingas Kemps goes All In! 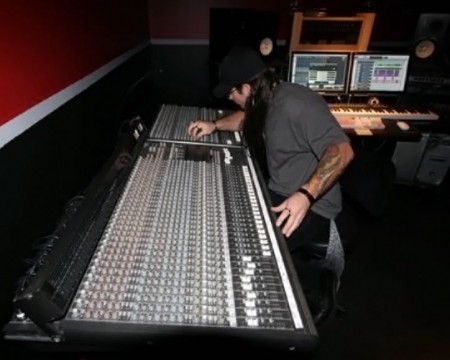 Many times, the pursuit of a dream means going “all in”—coming to a crossroads, making tough choices about your priorities, and choosing to jump in with both feet. It was at this crossroads where Chingas Kemps, a self-taught audio engineer, found himself recently.

“I was always tinkering around with audio since I was a kid,” he recalls. “I was always just kind of recording myself and my brother and my friends. And one thing led to another, and it became a passionate hobby, and then it became more on a professional level of a hobby.”

That “hobby” evolved into setting up his own part-time recording studio in his hometown in New Jersey, where he would record tracks for his own clients. “Mostly it was local bands, usually high school or college, but nothing on the pro level,” he says. “Everything was really kept pretty local.”

That’s when Chingas came to the crossroads.

“It was an accumulation of a thousand things, but…at the end of the day, I was just an unhappy person,” he says. “I knew my heart was in music, and my day-to-day job was in oil. And you can’t wake up and be unhappy every day. It just doesn’t work. So…I followed my passion. My passion is music, and I’m just going to cut all ties to everything else, Make it work.”

Part of cutting the ties meant making the tough choice to close his studio, pack up and move to Nashville. He also knew he needed to hone his engineering skills and up his game if he was to compete in that market.

“I’m self-taught, so I had five years of my studio and no one ever told me whether I was doing it right or wrong,” he says. “I wanted to be on a professional level. I wanted to have a solid foundation, a solid background, something that I can validate myself saying that, ‘Okay, I know what the hell I’m doing, and I could do this on the pro level, and I can come up with some great recordings.’”

When Chingas started scoping out schools in the area, he discovered that the Recording Connection could place him with a mentor in a real recording studio. “Having the option to be with a mentor instead of just being one of 15 or 20 in a class,” he says, “that spoke to me the most.”

The Recording Connection placed Chingas as a student extern under producer/engineer Ric Web (Taylor Swift, Alan Jackson) at South Street Studios in Nashville. Right away, he began to see the benefit in having a mentor to guide him one-on-one.

“I got to sit down with the mix and show my mentor exactly what I did, every step that I took,” says Chingas, “and having him hear it with his ears and his experience, and then let me know what I could have done differently, or what I might want to try next, or why did I do this? These are questions I never had to ask myself.”

Since starting the program, Chingas says the greatest benefit he feels is in learning from Ric how to fine-tune his mixes. “It sounds good to 95% of the people listening, but it could be a little bit better,” he says. “That’s where we are at now, is really just fine tuning things to push it to the next level.” Meanwhile, Chingas is wasting no time in doing what he can to connect with the Nashville music community, attending industry events like the Vintage King Expo. “I try to get to every one of them, and I try to hang out just as long as I can, and to talk to whoever is willing to listen,” he says. “Everybody I’ve met so far has been extremely friendly.”

Chingas tells us his goal is eventually to have his own publishing and production house. “It’ll be handling everything from songwriters to producers, getting the songs written, getting them recorded and mixed,” he says. To that end, he says he’s getting ready for the next phase by applying to Recording Connection’s new Learn from Legends master’s program. “The next step, we felt, would be learn the business side, learn the publishing, learn the licensing, learn what’s up with copyrighting and all that stuff,” he says. “Anything that [Ric] tells me business-wise, I really try to hone in on and decipher where he is going with it so that I can really just embed that in to my brain and use it in the future.”

Realizing a dream often hinges on what you do at the crossroads. In Chingas’ case, it meant shutting down his studio of five years in New Jersey and starting over in Nashville. Thanks in part to his Recording Connection externship with Ric Web, and in part to his own go-getter attitude, Chingas is now well on his way to achieving his dream.

It’s not an easy path, but for Chingas Kemps, it’s obvious that he’s good with his choice. He’s all in.