Dez Ward was debating going back to school for audio engineering. Originally from Tulsa, Oklahoma, Dez initially attended and graduated from Rogers State University with a degree in Sports Management. Nevertheless, Dez’s true passion has always been music. After moving to Dallas, Texas he decided to investigate learning more about the music production world. That’s when he stumbled upon the Recording Connection.

Dez had been attempting to teach himself audio engineering, but after unearthing the fact that the Recording Connection could grant him access to a real recording studio and real one-one-one time with a currently working producer he quickly applied. Dez was paired with two-time Grammy winner Tre Nagella of Luminous Sound in Dallas. Tre has worked with Lady Gaga, Blake Shelton, Kirk Franklin, J. Cole and numerous other high profile acts.

When asked what his thoughts were of Tre, Dez replied, “He’s super humble, man, and a great teacher. When I’m there I try to as many questions as much as possible.” Dez and Tre have a concrete working relationship. They spend time going over both the lesson plan for the Recording Connection coursework, and also working on the projects that come into Luminous Sound.

Dez recently had the opportunity to lend a hand in the studio while legendary Gospel entertainer Kirk Franklin was recording his up and coming album at Luminous. The experience that Dez has gained by working with Tre on this project has been invaluable. Not only has he gained insider knowledge and got to witness a first hand account of the creation of the record, but he’s also made more than a few industry connections and showcase the skills he’s building day by day. And, he’s asking questions. Speaking of how the one-on-one training he gets with Tre works, Dez says:

I’m asking all the questions. I’m writing down everything I can. That relationship, man, you don’t get that one-one relationship with most of your professors. Me and Tre are like super cool, man. And he’s always quizzing me on something. It could be so random. He’ll just throw a question out, ‘What’s SPL?’ Sound pressure level. I can’t answer all of them, but he goes, ‘Ah, see, you gotta know that. You gotta know that. You gotta know that.’ So yeah, I bug him from here and there, but he loves it, though. He explains everything in detail that I ask. Also, that soundboard, man, I love being able to answer questions about ‘What’s this button?’ ‘What’s that button?’ ‘What’s this button?’ That’s what I get out of it.

The time spent in the studio has only added to Dez’s passion for creating music. He’s set a series of goals for himself. After seeing what it’s like to work with a big name artist, he’s making plans to put himself on the map. “I’m inspired by some greats, and that’s my goal—not to be exactly like them, but I want that level. I know there’s other great engineers and producers out there and I’d love to work with them. But I’m definitely going to have my [own] land as well, just like other people did…I’m going to give it my all because it’s my passion.”

Recording Connection mentor Rene Reyes on The Creative, Fluffy Land of Unicorns, Objectivity & What it Really Takes to Be a Professional Music Producer.


Recording Connection grad & VP of Record Plant Isaac Wolfe shares his advice for making the most of your externship: 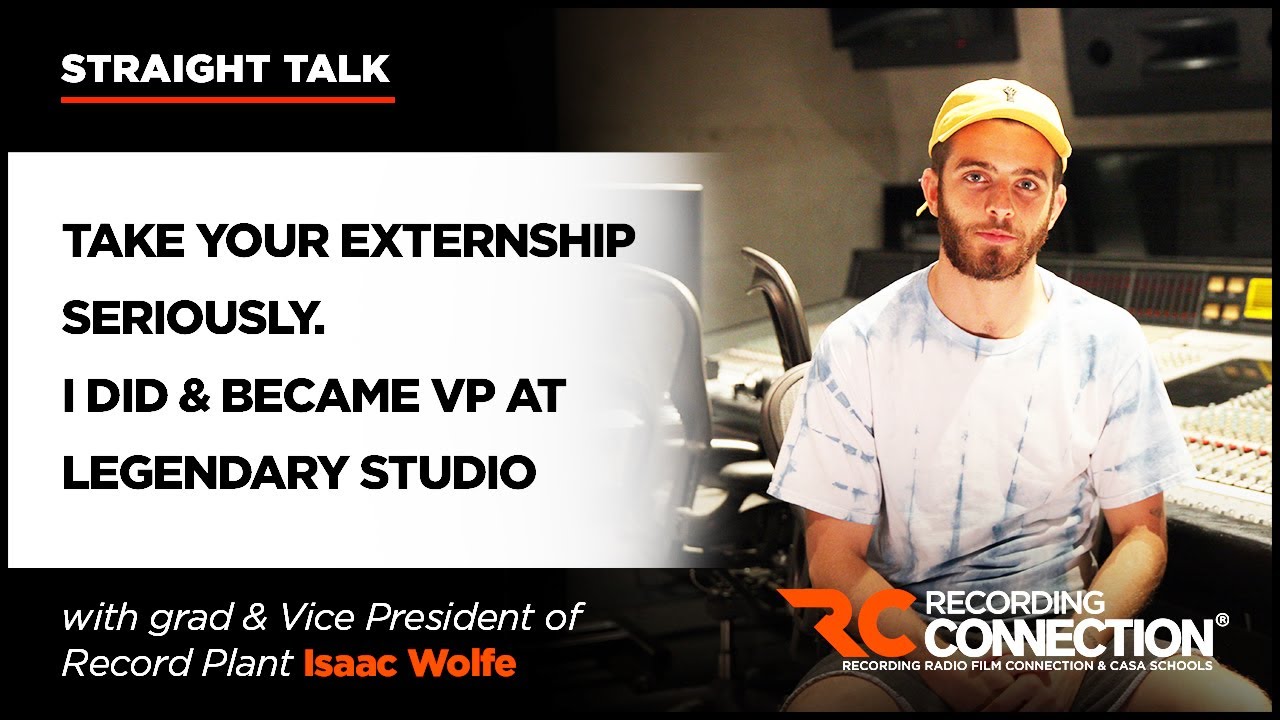